Lloyd’s actively examining Dublin as option for EU base 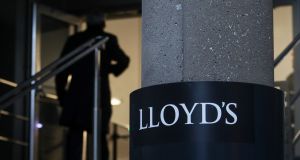 The arrival of Lloyd’s would pose particular issues for the Central Bank. Photograph: Chris Ratcliffe/Bloomberg

Lloyd’s of London is actively examining the option of setting up a subsidiary in Dublin, as it finalises its plan to deal with the move to Brexit.

The insurance market is due to bring a proposal to its members next month to establish a subsidiary in an EU country to safeguard its access to European markets and Dublin remains on the shortlist as the final decision approaches.

The arrival of Lloyd’s, the insurance market with a history stretching back more than 300 years, would pose particular issues for the Central Bank. Lloyd’s members would have to agree to inject new capital into the venture, to create a fully-fledged subsidiary.

However the structure of Lloyd’s, with risk taken on by various syndicates of members, rather than the company, would require a different regulatory oversight to a normal insurance operation.

Lloyd’s was one of the first major city companies to say it would move part of its operations out of London in the wake of the Brexit vote. Its chairman, John Nelson, said that London’s status as a global insurance hub was at risk after the referendum vote. Lloyd’s quickly started looking for a base for an EU subsidiary and it was reported in December that five centres were on the shortlist. Malta is also thought to be on the list.

Contacts are understood to be continuing between the company and its representatives and the Irish authorities. The scale of the likely investment is not clear. Lloyd’s would retain its headquarters and main operation in London, but the establishment of a subsidiary here would be a substantial boost to Dublin as a financial centre.

Some 11 per cent of Lloyd’s revenues come from EU markets outside the UK and Lloyd’s has said it must move to protect this business. Lloyd’s operates as a market, rather than a traditional insurance company, with financial backers, or members, grouped in syndicates, agreeing to take on insurance risks. It mainly operates in the general insurance and reinsurance sectors and is based in London’s Lime Street.

Lloyd’s and other big financial names based in the City are concerned that after Brexit the UK will leave the single market for financial services. This would mean that they would no longer be able to operate freely from London into other EU markets, though there is a suggestion that British firms could be given some freedom to operate in the EU under an “equivalence” agreement, where both sides agree that their rules offer similar safeguards.

This will be a key area in the negotiations to come between the EU and Britain. On Saturday, the EU’s chief Brexit negotiator, Michel Barnier, said that the EU will demand “special vigilance” before letting British financial firms access the bloc, because of the large risk London could pose to the EU’s financial stability.

Responding to a report in the Guardian which said he had told EU lawmakers that he wanted a special deal to maintain EU firms’ access to the City of London, Mr Barnier tweeted: “When asked on equivalence I said: EU would need special vigilance on financial stability risk, not special deal to access the City.”

An EU spokesman said the Guardian report did “not correctly reflect” Mr Barnier’s comments to a closed-door meeting with members of the European Parliament last week.

EU officials said the point Mr Barnier was making when asked about Brussels’ willingness after Brexit to recognise British financial regulations as “equivalent” in rigour to those of the EU was that, as a lot of EU business was likely to still pass through the City, EU equivalence rules would have to be much more tightly drafted compared to those for smaller centres.