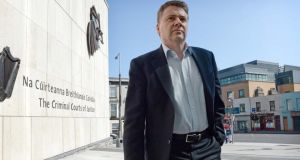 The former director of lending with Anglo Irish Bank, Pat Whelan, has been fined €3,000 for failing to keep a proper register of a fraudulent €8 million loan made to former bank director William McAteer.

McAteer, who was director of finance in the bank, will be sentenced next week for obtaining the loan from Anglo on September 29th, 2008, as the bank was on the brink of collapse.

Last month, McAteer (66), of Greenrath, Tipperary town, Tipperary, pleaded guilty to obtaining a loan of €8 million from Anglo on September 29th, 2008, which he secured against his shares in the bank. He then used the money to pay off a personal loan he had obtained from Bank of Ireland.

The court was told today that the loan was formulated by Anglo’s executive board of directors to prevent the Anglo shares owned by McAteer being sold off, which would have further damaged confidence in the bank.

Whelan (54) of Coast Road, Malahide, Dublin, pleaded guilty to an offence of failing to maintain a register in respect of the granting on September 29th, 2008, by the bank of a loan to another director of the bank.

Judge Martin Nolan noted that Whelan’s offence was a regulatory one which does not carry a custodial sentence. He said the recording of loans to directors was “of great importance” but that he was satisfied Whelan was not aware of the precise regulations. The judge imposed a €3,000 fine. The maximum he could have imposed was €12,697.

McAteer will be sentenced next Monday.