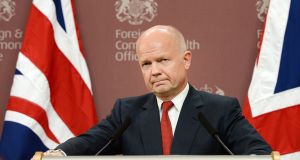 William Hague, who also served as leader of the Conservatives, was in favour of Britain staying in the EU. Photograph: Andy Rain/EPA

Citigroup has hired former British foreign minister William Hague to be a senior adviser to the Wall Street bank, as Britain prepares to negotiate its exit from the European Union.

Banks and investment firms have a long history of recruiting former political leaders and policymakers as advisers, and the appointment of Hague follows that of Mervyn King, former governor of the Bank of England as senior adviser to Citi in July.

“We’re delighted Lord Hague will be working with Citi as an adviser, providing his unique perspective to our clients,” a spokesman for Citi said on Tuesday. “Lord Hague’s experience on the global stage and his understanding of the forces shaping the world will be a key asset for Citi,” he said, adding that Haig would not hold a management role.

Hague, who also served as the leader of the Conservative party in Britain, quit frontline politics in the 2015 general election but has voiced support for Britain to stay inside the European Union.

The UK head of Citi, which employs around 9,000 people in Britain, said last October that some jobs in London’s financial sector would move to countries inside the European Union after Britain leaves the bloc, regardless of what deal is struck on access to the EU financial services market. - (Reuters)

1 Belgium helps Ireland to a Brexit boon
2 ‘My rent here is so low it’s a joke’
3 Can Grafton Street stop the flood of closures?
4 New Powerscourt Springs hotel to open in defiance of virus gloom
5 ‘Sad day’ for House of Ireland as tourism retailer goes out of business
6 This charming man: how Paschal Donohoe won the Eurogroup presidency
7 AIB to compensate another 1,100 tracker mortgage holders
8 Will family’s tax debt stop me getting my inheritance?
9 Examinership of Apple reseller Compu b confirmed
10 How to . . . move (almost) everything to your new phone
Real news has value SUBSCRIBE