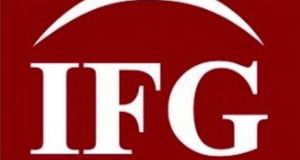 Strategic Equity Capital said it had raised its holding in IFG to 6.12 per cent from 5.05 per cent previously.

Strategic Equity Capital, which calls itself an investment trust “which seeks to create shareholder value through constructive corporate engagement with publicly-quoted companies”, said on Friday it had raised its holding in IFG to 6.12 per cent from 5.05 per cent previously.

The fund first emerged on IFG’s shareholder register in May 2015 when it breached the 3 per cent level at which it is obliged to show its hand under market transparency rules.

Mr Gallagher owns 9.65 per cent of the company, which has undergone significant restructuring in recent years, culminating in the sale in 2015 of its Irish pension and advisory business as well as its insurance unit. While IFG remains domiciled in Ireland and its shares listed on the Dublin exchange, it moved its corporate headquarters to London last year.

As a result, IFG has essentially become two businesses: James Hay, a provider of self-invested personal pension plans (SIPP) in the UK, has seen revenue growth slow last year; and Saunderson House, an investment adviser focused on professionals in the City of London.

Companies operating in the UK SIPP sector have been involved in a wave of consolidation in recent years.