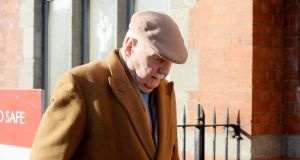 Michael Fingleton, erstwhile managing director of Irish Nationwide Building Society, is representing himself at the ongoing inquiry into alleged “contraventions” at the failed lender in the lead-up to the financial crisis. This has thrown up the spectacle of the former INBS boss (80) cross-examining various underlings about the nature of the work they did for him more than a decade ago.

So far, so impatient. Fingleton was advised last month by inquiry chairwoman Marian Shanley not to interrupt the answers being given by witnesses, as he had been in the habit of doing with the first witness. Some leeway was given on the basis that Fingleton wasn’t practised in the art of cross-examination.

Alas, not much seems to have changed. The answers given by former personal assistant Melody van der Berg were cut short on several occasions by her former boss at the inquiry hearings this week, prompting Shanley to instruct Fingleton to “let her answer the questions fully”.

When she had the opportunity, Van der Berg stood her ground on details where her recollection of how things were done at INBS did not tally with his version. One issue was whether memos to her email address were intended for his attention. He suggested that his name would have been on those memos if they were meant for him. “Not necessarily” if it was from someone else in the organisation, she replied. She printed off the emails and gave them to him, she told the inquiry and him: “Certainly with key issues, you would have been aware of them.”

It is fair to say that the offline way of doing things at INBS as late as 2006 seems highly symptomatic of the broader culture presided over by Fingleton. One executive was described by Van der Berg as “typical of the kind of person who would have sent hard copies”, while she also recalled that INBS managers felt they had “the freedom” to leave “a lot of documents” on her desk – again, intended for him.

Credit committee member Martin Noonan, meanwhile, is the latest INBS staffer “not confident” that minutes of its meetings captured all of the discussions that took place at them. On Thursday, it will be his turn to be cross-examined by the man they used to call “Fingers”.