Ireland pays €16.5m a day in interest on national debt 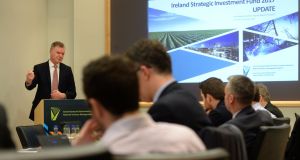 Ireland pays out €16.5 million a day in interest costs to service its national debt, the head of the National Treasury Management Agency (NTMA) has revealed.

Conor O’Kelly also noted that the interest bill on Ireland’s €200 billion debt is the fourth largest spending category for the Government behind social protection, health and education.

Speaking at a conference hosted by the Alternative Investment Management Association (AIMA), Mr O’Kelly said that, despite having one of the highest debt levels in the EU, Ireland was less exposed to the ending of the European Central Bank’s quantitative easing (QE) programme and the likely uptick in interest rates than others.

He said the agency had been planning for the ending of QE “since the day it began” and had effectively halved the Republic’s refinancing requirement for the next three years through the early repayment of International Monetary Fund (IMF ) loans and the early buyback and switching of near-term bonds.

“Our strategy has provided significant insurance against the possibility of rising interest rates in the coming years through pre-funding of future redemptions, lengthening the maturity profile and smoothing out future redemptions,” he told the conference.

The NTMA programme has reduced the State’s refinancing requirement for the next three years from €60 billion to €30 billion.

Nonetheless, Mr O’Kelly cautioned that national debt remained high and that the State was “still a very leveraged country”.

“While Irish bond yields are trading close to core euro zone levels, our relative debt level is one of the highest in the euro zone,” he said, noting that in absolute terms, the Republic’s debt level was over €200 billion

“Our debt-to-GDP looks positive after falling from 120 per cent to 72 per cent, but investors no longer consider that the key indicator. They place more emphasis on our absolute debt and other measures,” Mr O’Kelly said.

“One such measure is debt-to-Government revenue where Ireland is ranked well below the European average,” he said.

Mr O’Kelly said investors saw “our shareholdings across the banking sector as an opportunity to pay down our debt in a meaningful way and, while the decision is a matter for the Government, there are benefits to doing that sooner rather than later”.