ECB tells banks to get tougher on bad loans 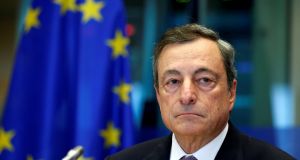 European Central Bank president Mario Draghi in Brussels, Belgium. For the first time, the banking supervisor laid down time limits for how quickly lenders should set aside capital for loans that turn bad. Photograph: Reuters

The European Central Bank told banks they will need to be tougher in dealing with bad loans as euro zone lenders continue to grapple with soured debts amounting to almost $1 trillion (€0.81 trillion).

For the first time, the banking supervisor laid down time limits for how quickly lenders should set aside capital for loans that turn bad.

The guidelines, published on Thursday, are the latest attempt by authorities to deal with a problem that still limits banks’ ability to lend and turn a profit a decade on from the financial crisis.

Lenders should fully cover the unsecured portion of a non-performing loan within two years, with a seven-year limit for secured credit, the ECB said. The guidelines for loans that go bad from April 1st will be applied to banks on a case-by-case basis.

Still, banks will only have to account to the ECB for their bad-debt provisioning from early 2021, the Frankfurt-based central bank said.

“Banks need to understand that this is a very important issue they need to be tackling, so regardless of the dates that are set out,” we’d “expect banks to be giving non-performing loans (NPLs) a very high priority,” Sharon Donnery, deputy governor of the Central Bank of Ireland and head of the ECB’s high-level group on non performing loans, told reporters on a call. They shouldn’t wait until 2021 before dealing with problem debts, she said.

The measures have been the subject of intense lobbying and pitted Italy, which has the region’s biggest pile of soured loans, against countries including Germany, which have sought to extend the guidelines to existing NPLs.

Under those rules, banks would have two years to set aside enough capital to fully cover unsecured loans that go bad, with a deadline of eight years for loans backed by collateral. The commission’s proposal applies to new loans issued on or after the start date of March 14th.

Though the ECB’s time frames are “harsher” than the commission’s, its guidelines are “much softer” in that banks have some three years to comply, Fabrizio Bernardi, an analyst at Fidentiis Equities, said in a note.

The ECB guidelines apply only to debt that turns sour in the future and not to the euro zone’s existing bad-debt pile of almost €800 billion.

Banks will be asked to build up the capital provisions over time to avoid what the Frankfurt-based institution called “cliff-edge effects”.

The time limits laid out by the ECB match its proposed guidelines published in October – which may suggest that Italian banks’ lobbying has had little effect.