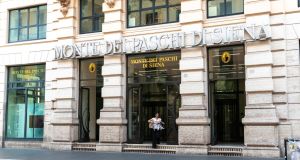 Thirteen former bankers from Monte dei Paschi di Siena, Nomura and Deutsche Bank were sentenced to jail on Friday after a case that shook Italy’s establishment and fomented the rise of populism in the country.

The sentences - among the harshest handed out to bankers convicted of financial crimes in living memory - were delivered in Milan after the men were found guilty of helping Monte dei Paschi hide hundreds of millions of euro in losses between 2008 and 2012, using complex derivatives contracts.

The verdict, read by Milan judge Lorella Trovato, was delivered to a packed courtroom in a fascist-era courthouse, the site of high-profile mafia trials and former prime minister Silvio Berlusconi’s court cases.

It seeks to bring to a close Italy’s biggest financial scandal, a tale of mismanagement and fraud, which led in 2017 to the nationalisation of Monte Paschi. The Siena-based bank is the world’s oldest, founded in 1472.

Mr Faissola was a senior executive at Deutsche, whose positions included head of asset management and head of commodities and rates. He left the bank in 2015 and became an adviser to Qatar’s al-Thani royal family, the largest shareholder in Deutsche.

The sentences are longer than for most high-profile banking crimes. Tom Hayes, a former star trader at UBS and Citigroup, was in 2015 sentenced to 14 years - reduced to 11 on appeal - for conspiring to rig Libor, the benchmark interest rate. UBS rogue trader Kweku Adoboli received seven years in 2012.

However, under Italian law, the verdict is the first instance of judgment and the former bankers will remain free pending an appeal. Giuseppe Iannaccone, lawyer for the former Deutsche Bank employees, said he was “shocked” by the ruling and was ready to appeal. “I am fully convinced of the innocence of our clients,” he added.

The three female judges also demanded Deutsche and Nomura pay about €160m between them. Deutsche said in a statement it was disappointed with the verdict and would review the rationale for it once it was published. Nomura said it was “disappointed” and would consider an appeal. Monte dei Paschi’s managers were not immediately reachable.

These losses came from investments in Italian sovereign debt made just prior to their value plunging during the European debt crisis. The complex derivative trades, called Santorini and Alexandria, misrepresented Monte dei Paschi’s finances during the period, prosecutors alleged.

The scandal dragged in the Bank of Italy and its former governor Mario Draghi, who later became head of the European Central Bank, amid allegations that the Italian supervisor should have known about the losses run up at what was then Italy’s third-largest lender. The Bank of Italy said it was never told about the derivatives contract and details were only discovered in a chest in the bank when Mr Mussari, the former chairman, resigned.

The ruling comes as Italy’s establishment continues to grapple with the popular fallout from the scandal at Monte dei Paschi and subsequent fraud uncovered at nearly a dozen other banks during the European debt crisis as Italy’s economy fell into a crippling, triple-dip recession.

Far-right politician Matteo Salvini has used the scandals as a means of drumming up support for his populist, anti-elite message.

The state was forced to take a more than 70 per cent stake in Monte dei Paschi in 2017 as the bank teetered close to collapse because of a capital shortfall and depositors fled. Under the terms of its rescue, Brussels has demanded the Italian state exit the bank’s shareholding by the end of 2021. Complicating an exit strategy for Rome, Monte dei Paschi remains weighed down by €14 billion of bad loans and more than €6 billion of legal claims.