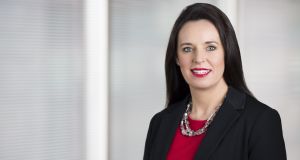 Anna Scally, KPMG partner in Ireland and leader of its fintech practice: “I predict that over the next few quarters, we will see more investors putting their money behind early stage companies with decarbonisation solutions”

A global survey of venture capital financing has found that the Irish fintech (financial technology) sector led the way, as Irish companies secured more than $185 million (€166 million) in VC funding in the third quarter of the year.

KPMG’s Venture Pulse survey tracked more than 4,100 VC funding deals globally between July and September, totalling more than $55.7 billion. So far this year, at least $28.7 billion worth of VC deals were in Europe, which set a quarterly record in Q3 with almost $10 billion of deals. Globally, quarterly VC funding dropped by 14 per cent from almost $65 billion.

In Ireland, the funding raised was spread over 22 deals during the three-month period. KPMG said Ireland remains a “hotspot” for fintech investment, with recent deals such as Fenergo’s $74 million fund raising deal and a Future Finance round for $26 million. KPMG said Irish biotech companies also continue to attract significant investment.

“It’s also interesting to see a large investment of $19.5 million in [vegan food company] Strong Roots – perhaps there is further opportunity for Irish companies in the lifestyle foods area,” said Anna Scally, a KPMG partner in Ireland and the leader of its fintech practice.

“Companies who are developing products and services to help address climate change and support the decarbonisation agenda are probably not attracting the VC dollars they should expect. I predict that over the next few quarters, we will see more investors putting their money behind early stage companies with decarbonisation solutions” she said.