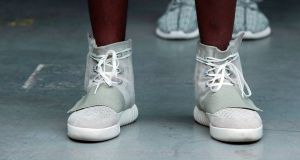 German sportswear company Adidas expects a boost to sales from new soccer merchandise ahead of the 2020 European championships after quarterly growth was held back by a weaker performance from Yeezy shoes designed by Kanye West.

Third-quarter sales rose a currency-adjusted 6 per cent to €6.41 billion, beating analysts’ mean forecast of €6.32 billion, although footwear sales were up just 1 per cent measured against a major Yeezy launch last year.

That also reined in ecommerce growth to 14 per cent from 37 per cent in the second quarter as many of the Yeezy shoes were sold online.

Shares in Adidas, which have risen by more than a third in the last year, were down just 0.9 per cent at the close in Germany.

Adidas has eroded Nike’s dominance of the US market in recent years, helped by partnerships with celebrities such as Kanye West, but Nike has been growing faster in China and Europe, a trend that continued in the latest results.

Nike reported sales rose a currency-neutral 10 per cent for the quarter ended August 31st, with sales in China up 27 per cent, though 4 per cent growth in North America missed expectations.

Adidas’s sales growth slowed to 11 per cent in China in July-September from 14 per cent in the second quarter, but accelerated in North America to 10 per cent as the company fixed supply chain problems that had dented growth earlier in the year.

The supply chain issues should only have a minimal impact on the fourth quarter, Mr Rorsted said, adding he expected a significant acceleration in the period, when Adidas is set to launch its first products in a partnership with singer Beyoncé.

The fourth quarter will get support from products for the European soccer championships such as the official replica ball, along with an earlier Chinese new year and the opening of a new flagship store in London, where sales have been encouraging.

“We are very confident about how the last two months of the year will unfold,” Mr Rorsted said.

He confirmed he expects 2019 net income from continuing operations of between €1.88 billion and €1.95 billion and said he now sees currency-neutral sales growth coming in at around 6.5 per cent, the midpoint of the forecast range of 5-8 per cent. – Reuters