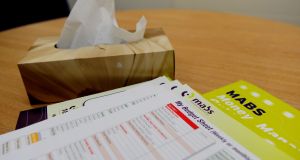 The deal sets out the rules of engagement between banks or funds and Mabs, when they are representing borrowers. Photograph: Aidan Crawley

New rules on how to resolve mortgage disputes have been agreed by the State-backed Money Advice and Budgeting Service (Mabs) and the Banking and Payments Federation Ireland (BPFI), the State’s main banking lobby group.

The deal, which aims to settle disagreements between lenders and distressed mortgage holders, has the support of so-called vulture funds, which are represented on the ground here by Credit Servicing Firms.

It sets out the rules of engagement between banks or funds and Mabs, when they are representing borrowers.

It provides for how Mabs and lenders can work together to try to resolve mortgage arrears for those borrowers who have already exhausted the Central Bank’s mortgage arrears resolution process and are entering or are about to enter the legal process.

The rules “make clear” that, where a mortgage is sold by a bank to a third party, that party must appoint a credit servicing firm to manage it and the protections afforded by the Central Bank’s Code of Conduct on Mortgage Arrears still apply.

This comes on foot of concern that borrowers whose loans were sold off by banks to third parties would not be afforded the same consumer protections.

A new consumer information leaflet, Protections If Your Mortgage Is Sold to a Third Party, has been published to accompany the agreement.

“It is never too late to do so, particularly for those in late-stage mortgage arrears; and we in BPFI are pleased to do all we can to facilitate such engagement – such as this BPFI-Mabs framework agreement.”

“We appeal to all people in mortgage arrears to contact their lender as soon as possible if they haven’t already done so; or to contact a trusted third party such as Mabs among others.”

Angela Black, chief executive of Citizens Information Board, described it as a welcome strengthening of the link between the clients of Mabs and their bank or other loan provider.

David Hall of the Irish Mortgage Holders Organisation gave a cautious welcome to the deal, saying “anything which brings the possibility of hope, closure and certainty to the lives of those trapped in mortgage arrears” was positive.

“Anything which acts as a constraint on the untrammelled exploitation by vulture funds of vulnerable people is also to be welcomed,” he said.

“Vultures are being hit hard by insolvency arrangements being approved by the courts, and it would be deeply worrying if Mabs accidentally became a party to replacing a legal framework with an unenforceable code,” he added.

“This morning’s agreement, however, raises more questions than answers and appears to favour vultures rather than customers, not least whether this informal scheme helps vultures bypass the current insolvency process with its checks and balances,” he said.