Cantor Fitzgerald to buy Merrion in deal worth up to €18m 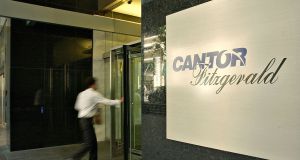 The tie-up between Cantor Fitzgerald Ireland and Merrion Capital comes at a time when management at Goodbody Stockbrokers and the firm’s majority owner, Fexco, are in advanced talks to sell the business to Chinese state-owned Zhong Ze Culture Investment Holdings

Stockbroking and investment services group Cantor Fitzgerald’s Irish unit has agreed to buy Merrion Capital in a deal worth up to €18 million, as the industry prepares for a wave of consolidation amid rising regulatory and compliance costs.

Merrion Capital’s chief executive, Pat O’Neill, who led a management buyout of the business four years ago, will step down as an executive but remain on board for a period in an advisory and consultancy capacity, according to sources. He is expected to return to work in fund management.

The transaction values Merrion Capital at between €14 million and €18 million, with the upper end subject to certain targets being met over the medium term, according to the sources. The combination of Cantor Fitzgerald’s 145-strong Irish workforce with more than 80 Merrion Capital staff will result in a business with a turnover of about €40 million.

“The addition of Merrion’s very experienced and respected personnel to our own wealth management, debt and corporate finance teams, together with Merrion Investment Managers, the excellent standalone investment management division, will create one of the largest financial services firms in Ireland, while retaining both firms’ client-centric offering and approach,” said Ronan Reid, chief executive of Cantor Fitzgerald Ireland.

New York-based Cantor Fitzgerald entered Ireland in late 2012 with the purchase of Dolmen Securities, led at the time by Mr Reid. The latest deal, which is subject to regulatory approval, will mark Merrion’s fifth ownership change in the two decades since it was set up in 1999.

In 2005, Iceland’s Landsbanki acquired control of the company before management bought it back four years later, after Icelandic authorities seized the lender. Former Merrion chief executive John Conroy and fellow director Shane Nolan led a shareholder restructuring in 2010, which resulted in a number of top executives leaving the firm.

Mr O’Neill and another executive, Ivan Fox, led a management buyout of the business in a deal worth almost €13 million in 2014, which saw Mr Conroy and US investment firm Allen & Co sell their stakes.

Two external investors that backed the 2014 Merrion transaction, Tetrarch Capital in Dublin and Bermuda-based Somers Ltd, have agreed to sell their respective stakes of about 20 per cent to Cantor Fitzgerald Ireland.

The tie-up between Cantor Fitzgerald Ireland and Merrion Capital comes at a time when management at Goodbody Stockbrokers and the firm’s majority owner, Fexco, are in advanced talks to sell the business to Chinese state-owned Zhong Ze Culture Investment Holdings.

Elsewhere, UK-based bank Investec currently has its Irish unit up for sale. AIB had been in exclusive talks up until the end of March to buy Investec Ireland. However, the talks have since stalled.

The flurry of activity follows on from the recent sale of the Irish Stock Exchange (ISE) to Euronext in a deal worth up to €158.8 million, delivering a payday for the ISE’s owners, Davy, Goodbody Stockbrokers, Invetec, Cantor and Campbell O’Connor.