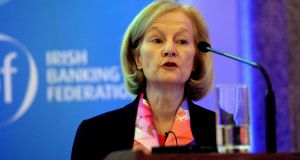 Daniele Nouy: she outlined how banks could only reclassify split mortgages under a series of strict conditions. Photograph: Cyril Byrne

The European Central Bank (ECB) has made it more difficult for Permanent TSB (PTSB) to pull off the sale of €900 million of split mortgages.

In a letter sent to to Sinn Féin MEP Matt Carthy this week, the head of the ECB’s banking supervision arm, Daniele Nouy, outlined how banks could only reclassify split mortgages, where repayments on part of a loan are put in ice until a future date, under a series of strict conditions.

These may prove too much for PTSB as it looks to remove 4,300 split mortgages from a €3.7 billion non-performing loans (NPLs) portfolio sale, which it initiated in February, to help lower its bad-debt ratio from 26 per cent to the European Union average of about 5 per cent.

PTSB’s version of split mortgages, where the warehoused part of a loan is not put into a separate contract, have been classified as NPLs since the bank started using this treatment for defaulted mortgages a number of years ago. By contrast, AIB can move its split loans into is performing portfolio after a probationary period, as it has separated the two loan parts into separate contracts.

In her letter, Ms Nouy said it was “essential that the retail split-loan restructuring has resulted in two separate and independent obligations with substantially different terms and conditions”.

She added that the borrower should not be obliged to make repayments on the frozen – or junior – part of the loan until the senior portion has been repaid in full.

Crucially, Ms Nouy said that if a bank acts in any way to indicate that the senior and junior parts of the mortgage are not independent from each other, it would call into question whether the original loan has been truly split. Any moves by a lender to increase the size of the senior part and reduce the junior portion during the lifetime of the agreement would indicate they are not separate, she said.

PTSB typically reviews its split mortgages every three years to see if some of the warehoused portion could be moved to the senior part of the loan.

Meanwhile, banks must fully write off the junior part of split loans, “derecognising” them from the balance sheets, to reclassify them as performing, Ms Nouy said. However, she signalled that this is purely an accounting matter, requiring appropriate provisioning, and does not mean that the borrower is off the hook.

The growing obstacles to reclassifying PTSB’s split loans as performing are likely to prompt the bank to look more closely at refinancing these mortgages in bond markets through a process known as off-balance-sheet securitisation.

A residential mortgage-backed securitisation (RMBS) deal would allow PTSB to derecognise the loans from its balance sheet, reducing its NPLs ratio, while the borrowers’ relationship would continue with the bank as before. It would also avoid an outright sale of the portfolio.

Economic uncertainty from Brexit and Covid: the key challenge for Irish business