Investigator who tore up Anglo files has 'unaired' information 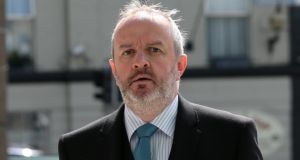 In his letter, Kevin O’Connell complains he has become ‘the personification’ of all that went wrong, and suggests he is not wholly to blame. Photograph: Collins Courts

The man whose shredding of files helped collapse the trial of former Anglo chairman Seán FitzPatrick wants a public hearing to explain his errors.

Kevin O’Connell, the former legal adviser to the Office of the Director of Corporate Enforcement (ODCE), has written privately to an Oireachtas committee to say he has new information about the investigation that was never aired at trial.

Mr O’Connell, whose handling of the investigation and subsequent actions were sharply criticised by the judge who ended the trial of Mr FitzPatrick over fears evidence was tainted, says he will share this previously unheard information with politicians and ask for a public hearing.

Following an investigation led by the ODCE, the State tried to prosecute Mr FitzPatrick for allegedly misleading the bank’s auditors about the extent of his debts to it at the height of the financial crisis.

In the middle of the first trial over this allegation, in 2015, Mr O’Connell admitted shredding a number of relevant files in a “panic”, and the jury was discharged after weeks of argument.

The retrial in 2017 which, at 126 days, was among the longest in the history of the State, also ran aground over serious concerns expressed by the judge over the handling of the investigation by the ODCE officials. Judge John Aylmer directed that Mr FitzPatrick be found not guilty.

On Tuesday, Mr O’Connell, who subsequently moved out of the ODCE, wrote a 10-page letter to members of the Oireachtas joint committee on enterprise and business, which wants to examine how the ODCE botched the Anglo investigation.

The matter may be raised next week when the head of the ODCE, Ian Drennan, appears before the committee – the first time the ODCE chief has appeared before an Oireachtas committee in his seven years in the post.

Mr O’Connell accepts that he messed up in the investigation. But in his, at times impassioned, letter to the committee he complains he has become “the personification” of all that went wrong, and suggests he is not wholly to blame.

“I readily accept that all of that criticism was inevitable and the vast bulk of it was quite legitimate,” he writes. “[But] some elements of it were excessive.”

He complains about a public committee hearing held last week, at which department officials were criticised over the ODCE’s handling of the Anglo investigation. He says he wants the blame apportioned to him to be “accurately calibrated vis-a-vis the related responsibility of others”.

The ODCE’s conduct in the investigation has been criticised by many committee members, including Fianna Fáil’s Billy Kelleher and Sinn Féin’s Maurice Quinlivan and Pádraig Mac Lochlainn.

Mr O’Connell suggests the basis upon which the committee is looking into the ODCE investigation is “insufficiently informed and incomplete” and its actions, he claims, are “puzzling” and “worrisome”.

He criticises the committee for, he claims, not accepting the offer of a report on the failures from Mr Drennan. A separate report by Mr Drennan to Government has not been published, but is being sought by the committee.

Mr O’Connell says it is “imperative” the committee gets the best information on what happened. Mr O’Connell claims to have “particular information” on the Anglo investigation “of a highly personal variety” that he was not allowed to air at Mr FitzPatrick’s trial.

“I am in a position to give it to the committee if it wishes to receive it,” he wrote.