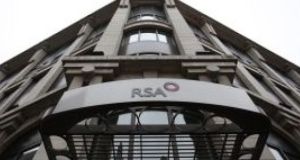 The deal could see the insurer broken up.

RSA is in talks with a consortium of Canadian insurer Intact Financial and Danish insurer Tryg about a possible break-up deal that values the British firm at about £7.2 billion (€8 bn).

RSA, which has an Irish insurance unit, said its board would be minded to recommend the proposal for 685 pence in cash per RSA share, plus the payment by RSA of its previously announced interim dividend of 8 pence per share.

The offer was made on October 2nd and represents a 50 per cent premium to RSA’s closing price on October 1st.

If successful, the deal would allow Intact to boost its presence in the competitive Canadian property and casualty (P&C) industry while Tryg would create the largest listed P&C insurer in Scandinavia with total assets of about 99 billion Danish crowns.

Shares in RSA shot up 46 per cent to close at 670 pence on Thursday. Jefferies analysts said the offer price represented “more than fair value”.

Best known in Britain for its More Than brand, RSA provides home, motor and commercial insurance and has large operations in Canada, Ireland and Scandinavia.

Under terms of the deal, Intact and Tryg would split up the business with the Canadian firm keeping RSA’s Canada and UK and international operations, while Tryg would take control of RSA’s Sweden and Norway business. The pair would also co-own RSA’s Danish unit.

Tryg, which is advised by Morgan Stanley, would take on the highest bill, paying RSA about 4.2 billion pounds and launching a rights issue in 2021 to finance the deal.

Intact, advised by Barclays, would contribute £3 billion to the transaction which it plans to fund through an equity private placement - mainly backed by cornerstone investors - as well as debt and preferred share issuances.

The two insurers are currently carrying out due diligence on RSA and have until December 3rd to make a firm offer.

RSA has hired Robey Warshaw, Goldman Sachs and Bank of America to advise on the deal which comes five years after a previous attempt to merge with Zurich Insurance fell through in 2015.

Both Intact and Tryg have been mooted as potential bidders since then, with former Tryg CFO Christian Baltzer taking the helm of RSA’s Danish business last year.

RSA chief executive Stephen Hester, a former boss of NatWest who joined RSA in 2014, shored up the company’s balance sheet with a £773 million rights issue and scaled back underperforming business.

Rising commercial insurance rates, lower non-pandemic related claims and a tightening up of its underwriting strategy boosted RSA’s underwriting profit in the first nine months of 2020, despite the impact of COVID-19, it said earlier.

RSA’s combined ratio, a measure of performance in which a level below 100 per cent indicates a profit, stood at 90 per cent in the third quarter, compared with 93.6 per cent at the end of 2019.

The insurer said it was revising down its initial estimate of the gross impact of a September judgment in a UK test case brought by the British markets regulator around the payment of business interruption insurance by around 20 million pounds.– Reuters