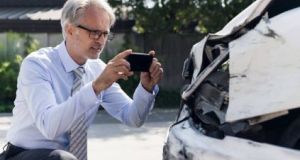 The Private Motor Insurance Report said that on average Irish motor insurance premiums had dropped by 9 per cent from the middle of 2018 following a 66 per cent surge over the previous five years. File photograph: Getty

Legal bills accounted for a third of the average €71,050 settlement of litigated motor injury cases in the Republic in the past five years, and even wiped out the benefit of taking lawsuits in most cases, according to new data from the Central Bank.

Profits rose 9 per cent on 2018, even as premiums eased back following a 63 per cent rise over the previous five years.

The report said that on average Irish motor insurance premiums had dropped by 9 per cent from the middle of 2018 following a 66 per cent surge over the previous five years, as insurers sought to make up for large losses racked up by the industry in the middle of the last decade.

“For any hard-pressed motorist hoping that government action might be driving motor insurance premiums down, the data in this report makes for bleak reading,” said Peter Boland, director of the Alliance for Insurance Reform business lobby group.

“The report also lays bare the scale of the greed that has driven the current insurance crisis, enriching insurance companies, brokers and lawyers at the expense of Irish motorists struggling to make ends meet.”

Between 2015 and 2019 half of personal injury claims arising from motor incidents were settled directly with insurance companies, with 17 per cent being resolved through the Personal Injuries Assessment Board (PIAB), and 33 per cent going the legal route.

While the average compensation cheque from litigated cases, at €46,214, was 3½ times the average direct settlement and twice the average PIAB award, it also typically involved €23,409 of legal costs.

Assessing claims for less than €100,000 – which make up 94 per cent of claimants – the Central Bank found that the average compensation for a litigated case was €23,572, only marginally higher than the €22,319 amount for a case that was dealt with by PIAB.

However, the average legal cost of a claim pursued through the courts was €14,949, compared to €514 for one that went through PIAB.