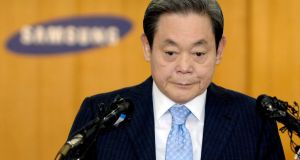 Investors are betting that the imperatives of maintaining Lee family control and paying inheritance tax – estimated at about 10 trillion won (€7.5 billion) for listed stockholdings alone – will be the catalyst for change, although analysts are divided on what form that change will take.

Shares in Samsung C&T and Samsung Life Insurance closed up 13.5 per cent at a two-month high and 3.8 per cent, respectively, while shares in Samsung SDS also rose. Samsung Electronics – the jewel in the group’s crown – finished 0.3 per cent higher.

Son and heir apparent Jay Y Lee has a 17.3 per cent stake in Samsung C&T, the de facto holding firm, while the late Lee was the top shareholder of Samsung Life with a 20.76 per cent stake.

“The inheritance tax is outrageous, so family members might have no choice but to sell stakes in some non-core firms” such as Samsung Life, said NH Investment Securities analyst Kim Dong-yang.

“It may be likely for Samsung C&T to consider increasing dividends for the family to cover such a high inheritance tax,” KB Securities analyst Jeong Dong-ik said.

Lee (78) died on Sunday, six years after he was hospitalised due to heart attack in 2014. Since then, Samsung carried out a flurry of stake sales and restructuring to streamline the sprawling conglomerate and cement the junior Lee’s control.

Investors have long anticipated a further shake-up in the event of Lee’s death, hoping for gains from restructuring to strengthen de facto holding company Samsung C&T’s control of Samsung Electronics, such as Samsung C&T buying an affiliate’s stake in the tech giant.

“At this point, it is difficult to expect when Samsung Group will kick off with a restructuring process as Jay Y Lee is still facing trials, making it difficult for the group’s management to begin organisational changes,” Jeong said.

Lee is in two trials for suspected accounting fraud and stock price manipulation, as well as for his role in a bribery scandal that triggered the impeachment of former South Korean president Park Geun-hye. The second trial resumed hearings on Monday.

Lee did not attend the trial on Monday, as Samsung executives joined other business and political leaders for the second day of funeral services for his father. – Reuters