Has NatWest finally run out of patience with Ulster Bank?

Behind the business-as-usual facade, things are not rosy between the bank and its parent 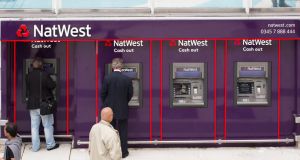 On the surface, at least, it’s business as usual at Ulster Bank in the Republic.

The bank’s announcement last week that it was cutting 266 of its 2,800-strong workforce as it ramps up efforts to rein in costs was hardly a surprise. The income of banks across Europe is being squeezed by low interest rates, muted loan demand, and soaring problem loans resulting from Covid-19. Bank of Ireland unveiled plans in August to eliminate 1,400 positions and AIB flagged in February that it will cull 1,500 roles in the coming years.

Ulster Bank, led by chief executive Jane Howard, is also actively pushing its mortgage offering to switchers as Irish lenders seek to defend themselves against the arrival of Spanish-owned Avant Money in the market this week with the lowest rate around.

And on Thursday, the bank announced that it has appointed former chief executive of Canada Life Ireland Ruairí O’Flynn as its new chairman, replacing Des O’Shea, who leaves the board following eight years of service.

“I look forward to working closely with Ruairí as we support our customers to thrive and embed our purpose throughout the NatWest Group,” said Howard Davies, chairman of Ulster Bank’s parent NatWest, formerly Royal Bank of Scotland (RBS).

But six years after RBS carried out a major review of its future in the Republic – which looked briefly at pushing Ulster Bank into a tie-up with another Irish lender and selling a major stake to private-equity investors – the UK group is back where it started.

This time, however, NatWest is actively considering winding up the Irish business, though there is an outside chance of an industry merger. Permanent TSB (PTSB) would be the only realistic candidate. However, no approaches have been made by NatWest as of yet.

The Brexit strain on relations between the Government, which owns 75 per cent of PTSB, and Boris Johnson’s administration, which has a controlling 62 per cent stake in NatWest, doesn’t help.

RBS bought Ulster Bank in 2000 as part of its acquisition of NatWest – and went on to double down in the Celtic Tiger economy three years later by snapping up First Active.

Under the ultimate control of then RBS chief executive Fred Goodwin, Ulster Bank bankrolled some of the Republic’s biggest real-estate developers, more than doubling assets to €62 billion in the four years before boom turned to bust in 2008. On the retail side, First Active became the first to offer loans for 100 per cent of the value of homes in 2005 – a development that would also come back to haunt the market.

Ulster Bank required a £15.3 billion (€16.4 million) parental bailout during the crisis, equating to a third of the money UK taxpayers pumped into the entire group. More than a decade of selling off problem loans and muted demand in the Republic for new lending then brought their own problems, which have been exacerbated by the Covid-19 crisis.

Ulster Bank’s running costs were between 95 per cent and 111 per cent of its income over the past three years – about double what banks typically target. The wider UK group’s cost-income ratio stood at 65 per cent in 2019.

The Irish unit’s profitability has also stood out as a weak point, with its net income amounting to 2.3 per cent of the equity that NatWest had invested in the business at the end of last year. The group’s return-on-equity ratio was 9.4 per cent.

Outgoing RBS chief executive Ross McEwan said within months of stepping down in late 2019 that it would be another “three to four years” before Ulster Bank would be making enough money to cover its funding costs. “We’ve not given up on Ireland,” McEwan said. “But it’s going to take some time.”

It appears that his successor, Alison Rose, is running out of patience.