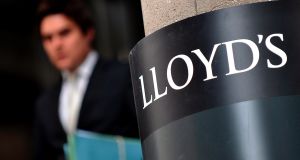 The coronavirus bill for insurers continues to mount with Lloyd’s of London saying it now expects to pay out up to £5 billion pounds (€5.48 billion) in claims. Photograph: Andy Rain/EPA

The coronavirus bill for insurers continues to mount with Lloyd’s of London saying it expects to pay out up to £5 billion (€5.48 billion) in claims.

The world’s largest insurance market announced a pre-tax loss of £400 million (€433 million) for the first half of the year. The firm posted a £2.3 billion profit for the same period last year.

Insurers around the world have paid out on event cancellation, travel, trade credit and business interruption policies due to the virus, with Lloyd’s expecting the global bill for non-life insurers to reach more than $100 billion (€84.5 billion).

Lloyd’s, whose results are an aggregate of its more than 90 syndicate members, said it would pay out £2.4 billion in Covid-19-related claims in the first half, net of reinsurance. That compared with a £2.3 billion profit in the first half of 2019.

“The first half of 2020 has been an exceptionally challenging period,” chief executive John Neal said in a statement Thursday. “The pandemic has inflicted catastrophic societal and economic damage, calling for unparalleled measures to stifle the spread of the virus, and to get businesses and economies back on their feet.”

Lloyd’s now estimate the Covid-19 crisis will cost more than three disastrous hurricanes in 2017, which cost Lloyd’s $4.8 billion and the 9/11 attacks in New York, after which Lloyd’s paid out $4.7 billion.

The results come as the industry grapples with a string of massive payouts including ongoing costs related to the coronavirus outbreak, an early hurricane season that’s already caused tens of billions of dollars in losses, and a massive explosion in Beirut’s port that damaged swathes of the city.

In May, Lloyd’s predicted a torrid year for insurers with around $203 billion in losses as shutdowns hit economies and stock markets slumped. As claims from affected businesses flooded in, some insurers halted dividend payouts and rushed to raise capital while governments moved to support more exposed sections of the industry, such as trade credit insurance.

The exchange operator received some 30,000 claims related to the outbreak, Mr Neal told Bloomberg in June.

Swiss Re earlier this week posted a surprise $1.1 billion first half loss as it set aside money to cover future losses related to the pandemic. Munich Re also took a €1.5 billion first-half hit and said it faced claims of at least €100 million related to the Beirut blast.

Combined ratio, a key measure of underwriting profitability, deteriorated to 110.4 per cent from 98.8 per cent a year earlier. A level above 100 per cent indicates an underwriting loss. – Bloomberg/Reuters/PA