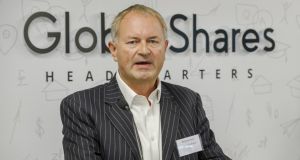 Clonakilty-based financial technology company Global Shares intends to float on public markets in 2024 once it reaches a valuation of €1 billion.

The group, which employs 369 staff as it stands, intends to increase its headcount to 1,000 in the coming four years. The company is looking to hire developers, software engineers, compliance officers and business analysts. The business added 70 staff during the State’s lockdown.

“The big difference for Global Shares is it’s a very entrepreneurial company with every employee having a stake. Our competitors are big corporates and they have a corporate attitude and I believe that’s what makes the difference,” chief executive Tim Houstoun said.

Founded in 2005, the company expanded into software solutions in 2015 and launched its platform for employee share ownership. It has 16 offices globally including in the US, Japan and China. Clonakilty is the company’s headquarters and there are currently 167 staff based in the town.

Mr Houstoun, a finalist in the EY Entrepreneur of the Year competition, said the group recorded revenue of €20 million last year and has already surpassed its target to sign €13 million worth of new business this year. In March alone, for example, the company won €6.4 million in new business. About €57 billion worth of assets are controlled through the company’s platform.

“Our growth over the past couple of years has been enormous, but over the next few years we’re aiming to be west Cork’s first unicorn, and we’re on track to achieve that,” Mr Houstoun said.

He said the company plans to launch an initial public offering when it reaches that €1 billion valuation and will seek to list either in Japan or the United States. “We’re making huge inroads in Japan in winning clients,” Mr Houstoun said, noting work with banks such as Nomura.

Revenue at the company is expected to reach €125 million by 2024, Mr Houstoun added. “We have also just launched a new offering to help venture-backed private companies like ourselves to create and manage employee options as well as helping their investors track the value of their ownership.”

1 House asking prices rebound but will likely fall again - MyHome
2 Plans for €2bn Dart expansion lure Bombardier to Dublin
3 City firms move £1.2tn and 7,500 jobs out of London - EY
4 Google tells workers to return to country where they are employed
5 TV guide: Pros and cons of broadcast television options
6 Irish food trade could slide by one-third if EU and UK fail to cut deal
7 Construction sector 'unlikely to recover' before 2023
8 H&M to close hundreds of stores as online shift accelerates
9 Let’sGetChecked chosen by American Airlines for pre-fight Covid testing
10 There may be trouble ahead for the housing market
Real news has value SUBSCRIBE