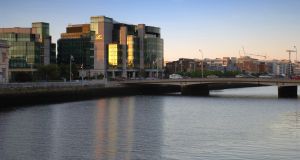 Changes to the rules governing how private funds are set up in Ireland will attract up to €20 billion a year in global capital and create an additional 3,000 jobs, the funds industry here has claimed.

The Government’s new Investment Limited Partnership (ILP) legislation, which passed into law just before Christmas, overhauls the existing legislation to allow for the establishment of special investment partnerships.

Ireland is the second-largest funds hub in Europe behind Luxembourg but, until now, has been unable to offer this particular type of fund structure, which is increasingly used by fund managers generally and increasingly used to finance green energy projects.

Even the State-owned Ireland Strategic Investment Fund (ISIF) has – in the absence of ILP-enabling legislation here – been forced to use Luxembourg-domiciled vehicles to fund certain projects.

Based on Ireland’s existing market share of the European funds industry and the State’s attractiveness as an English-speaking, common law jurisdiction, Irish Funds, the umbrella group for the industry, estimates that the new legislation will attract up to €20 billion per annum in global private capital.

And because these funds are more labour-intensive to operate, up to 3,000 fund management roles are expected to be created alongside the additional investment. There are 16,000 people employed in the funds industry here.

“When we first conceived of this legislation four years ago it was pre-Brexit, it was also pre the persistent low interest rate environment, it was pre the EU’s green deal and it was pre-Covid,” the chief executive of Irish Funds, Pat Lardner, said.

These factors had led to an explosion in investment via private partnership structures and Ireland was now in an ideal position to capitalise, he said.

Over the past five years there has been 3,300 private equity funds launched in Europe, the vast majority private partnership structures.

“We wouldn’t have seen any of that business,” Mr Lardner said.

He said Ireland had about 18 per cent of the European funds business but virtually none of the private equity or private markets business because of the absence – until now – of this type of legislation.

The change will also allow Ireland become a hub for green finance just as the world refocuses on combatting climate change.

“This is game-changing in terms of Ireland’s global competitiveness and will enable and drive new business and opportunities,” he said.

“A significant number of the major European private equity, infrastructure, real estate and private credit managers are located in London. Those London managers will need an EU fund in order to be able to raise capital from EU investors post December 31st,” he said.

“Ireland is the natural domicile of choice for a London manager’s EU funds. The ILP will only serve to enhance Ireland’s offering to the UK private equity sector post Brexit,” Mr White said.

5 Who was Richard Cantillon?