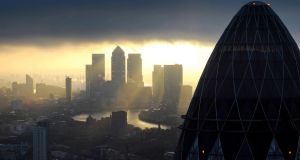 The future relationship between the city of London and the EU remains uncertain. Photograph: Stefan Rousseau/PA Wire

Britain’s long-awaited trade deal with the European Union still leaves many questions unanswered for the world’s biggest banks, trading venues and money managers as they prepare for a rupture in the region’s financial system.

They’ve been bracing for departure day since Britain voted to quit the European Union in 2016. Since then, little progress has been made in crafting a future relationship between the respective finance industries even though the City of London, the continent’s dominant hub, will be firmly outside the EU in a matter of days.

UK Chancellor of the Exchequer Rishi Sunak said Sunday that discussions with Brussels over access for financial services will continue. The two sides have said they will look to reach a Memorandum of Understanding around regulatory cooperation by March.

Here are some of the issues the finance industry will be looking to address now that a Brexit trade deal has been reached.

Besides the trade talks, finance executives have been worried about the separate process of securing “equivalence.” The UK has given up its rights to “passports” for cross-border banking, so London firms hoping to do business in the EU must generally rely on Brussels declaring that Britain’s rules are robust enough in each area of finance. So far, the EU has allowed access to London’s dominant clearinghouses until June 2022 to keep the multi-trillion dollar derivatives markets stable, but has been reluctant to extend the same rights to investment banking and trading stocks.

On the UK side, Sunak unilaterally granted equivalence to EU firms for capital, auditing and insurance standards in November. The UK has previously said British firms can continue trading all shares through EU venues, even if mutual equivalence cannot be achieved. But there’s been few concessions from the EU and equity markets could still fracture without equivalence if the bloc forces European investors to trade EU shares within its borders. Industry lobbying groups are ramping up pressure for a last-minute reprieve on derivatives trading to make sure deals can be done in an efficient way across Europe. Without a solution, some derivatives business might abandon Europe and move to the US, which already has equivalence from the EU.

Regulators in the U.K. and Europe have cautioned that markets could turn volatile and unmanageable. Watchdogs have stressed in the past few weeks that the industry should refocus on Brexit planning, such as ensuring EU offices are up and running, to avoid last-minute surprises for clients and markets after Dec. 31. The London branches of big European banks could face a particular challenge trading trillions of euros in derivatives because of conflicting UK and EU regulations.

However, regulators have said they don’t expect Britain’s departure to jeopardise the stability of the financial system.

Banks such as JPMorgan Chase and Co. and Goldman Sachs have put hundreds of staffers on notice to relocate to EU cities including Frankfurt by the end of the year. The European Central Bank’s supervisors have warned against running “letterbox” offices, so firms need to set up sales, compliance and governance staff inside the bloc. About 7,500 bankers so far are set to move to lenders’ new EU hubs, according to consultancy EY. Firms that have been granted a banking license in Germany will probably move as many as 2,500 jobs there, according to the Bundesbank.

Wall Street’s big five banks -- JPMorgan, Goldman Sachs, Bank of America Corp., Citigroup Inc. and Morgan Stanley -- have long preferred London as a base, retaining three times the equity and more than four times the amount of risk-weighted assets in their UK subsidiaries compared to their EU ones at the end of last year. London’s lead will probably be dented in the months to come. JPMorgan is moving €200 billion in assets to the EU. The ECB is pressing for more EU business to be managed locally instead of simply being routed to London through “back to back” transactions between banking offices. Frankfurt will be among the big winners from the shift. Non-German lenders are in the process of moving an additional €397 billion of holdings to the country, taking their combined balance sheet there to €675 billion at the end of the year, the Bundesbank said in early November.

For banks and brokerages, a big task is making sure their clients have the paperwork in place to trade with new EU divisions. According to the Bank of England’s Financial Policy Committee, two thirds of derivatives clients had actually done the work by October. Smaller customers have been slower. Regulators also want firms to make sure they can transfer personal data across the English Channel in compliance with data-privacy regulations. A temporary solution to data-sharing was agreed to help firms for several months. And UK authorities say lenders should give customers ample notice if their service might be cut off or reduced once the Brexit transition period ends. – Bloomberg