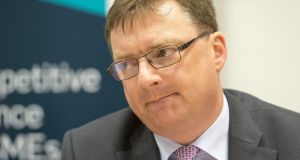 Mr Ashmore succeeds Eugene O’Callaghan, who announced in August that he was planning to step down. Mr O’Callaghan had led Isif and its predecessor, the National Pensions Reserve Fund, for a decade since 2010, assuming the role as the State experienced a financial crisis.

Both Isif and SBCI fall under the umbrella of the National Treasury Management Agency.

Mr Ashmore, who joined the NTMA in 2006 to be part of the National Pensions Reserve Fund team before ultimately becoming the fund’s deputy director, was picked in 2014 to lead the setting-up of SBCI. He subsequently became its chief executive.

Before joining the NTMA, Mr Ashmore was an investment manager with Greenaap Consultants Limited, a private family office. He is a graduate of the University of Aberdeen and a member of the Scottish Institute of Chartered Accountants.

The process to find his successor at SBCI will start in early 2021.

Isif is effectively a State sovereign wealth fund, responsible for holding Irish taxpayer stakes in bailed-out banks and investing on a commercial basis in areas of Government interest, from housing to addressing climate change.

Following the arrival of Covid-19, the then government asked it to oversee a €2 billion fund to support large businesses hit by the pandemic.

Billions of euro have been knocked off the value of Isif’s combined stakes in AIB, Bank of Ireland and Permanent TSB this year as a result of the pandemic and the ongoing effect of ultra-low central bank rates, which have been squeezing lending margins in recent years.

The Iseq financial index, dominated by the banks, has fallen almost 27 per cent since the end of 2019.