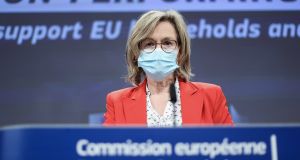 Mairead McGuinness: “I think we can collectively say that we want to look after societal interest, so we need banks that function.” Photograph: EPA

Ireland’s EU commissioner Mairead McGuinness has launched a plan to make it easier for banks to sell non-performing loans to third parties in a bid to prevent bad debt dragging on the euro zone economy.

It comes amid concerns that the economic impact of the Covid-19 pandemic could cause loan defaults to double by the end of the crisis as state supports to sectors and employees are withdrawn. The European Commission believes that this risks prolonging the downturn as an accumulation of bad debts prevents banks from lending in the future, seen as necessary to fuel recovery.

The proposals have been criticised by consumer protection organisation BEUC, which has said the initiative “is against the interests of borrowers” because “they would be exposed to vulture funds and debt collectors located in other countries, and potentially to even worse treatment and repossession of homes”.

However, Ms McGuinness said the package included protections for consumers to ensure that the terms of the loan with the initial bank would not worsen when the loan was sold to a new organisation.

“Vulture funds – this is a word that strikes horror into many businesses, and, indeed, people who have dealt with vulture funds – that I have direct knowledge of have shared some very difficult experiences,” McGuinness said.

“I think we can collectively say that we want to look after societal interest, so we need banks that function. We know that if we leave non-performing loans on banks there will be a credit crunch, and everyone will suffer. There are other implications if we do nothing.”

The proposals aim to create a single secondary market in the EU for non-performing loans, allowing buyers to operate more easily across borders. The commission believes this will make it easier for banks to sell loans and improve terms by increasing competition.

To help this the package includes a reform of the EU’s insolvency and debt recovery legislation, and guidelines for smaller and less experienced banks to help them to organise the sale of loans to third parties.

The commission has also said it will help member states to set up Nama-style bad banks to take defaulting loans off banks’ balance sheets, and includes provisions for public supports for struggling banks by national governments.

Eamonn Hughes, an analyst with Goodbody Stockbrokers, was sceptical on the need for a new bad bank in the Republic.

“I see little appetite or need in Ireland to set up another bad bank to deal with non-performing loans resulting from Covid-19. Irish banks have the skillset to work through problem loans themselves, having gone through loan restructuring and asset sales over the last number of years.”

Mr Hughes estimates that non-performing Irish business loans will peak at 13.5-14 per cent next year, while non-performing mortgages should come to 9 per cent.

“This support would only be available to banks which were otherwise viable prior to Covid-19 crisis, so not to the banks that did not manage their books properly during good economic times,” Mr Dombrovskis told journalists.

The legislation must be debated and agreed by national governments and the European Parliament in order to enter into force.

6 GAA gets go-ahead for new hotel near Croke Park

9 State factors in reduction of €2bn in corporation tax