Only 48.8% of SMEs have gone back to full repayments since November expiry date 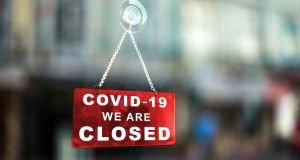 Banks extended 151,000 payment breaks of as long as six months to households and businesses during the economic shock. Photograph: iStock

Fewer than half of the small- to medium-sized businesses (SMEs) that availed of loan payment breaks during the coronavirus crisis had returned to making full payments on their original loan terms by the end of last month, according to banking industry data.

Banks extended 151,000 payment breaks of as long as six months to households and businesses during the economic shock, with 94 per cent of these having expired by the end of November, according to Banking & Payments Federation Ireland (BPFI).

While 84.7 per cent of owner-occupier mortgages that were subject to the payment holidays have returned to normal repayment schedules as the breaks expired, only 48.8 per cent of SME accounts have done so. Some 5.7 per cent of the SME loans are not making full repayments, while a further 45.4 per cent are repaying on an extended term, according to the data.

However, 84.7 per cent of owner-occupier mortgages that availed of the relief are back paying in line with their loan contracts. Some 10.9 per cent are not paying in full, while 4.4 per cent have availed of loan term extensions.

About 69 per cent of all accounts with expired payment breaks had returned to full repayments on existing terms by the end of November, down from 76 per cent a month earlier, and 83 per cent at the end of September, when banks stopped offering blanket payment breaks. The deterioration suggests that the period of Level 5 restrictions between late October and December 1st had a negative effect on Irish borrowers.

The Republic again entered Level 5 restrictions over the weekend until at least January 12th, though, unlike the last time, non-essential retail stores, gyms and leisure facilities may remain open.

Almost 23 per cent of SME loans were subject to payment breaks as of early September, compared to 6 per cent of owner-occupier mortgages. Companies in the tourism and leisure sectors have been among the worst affected by the crisis.

The State’s five retail banks – including overseas-owned Ulster Bank and KBC Bank Ireland – set aside a combined €2.6 billion of provisions in the first half of the year to absorb an expected surge in bad loan losses as a result of the economic shock caused by the pandemic.

Banks have returned to offering forbearance and loan-restructuring solutions on a case-by-case basis to borrowers in financial destress since they stopped extending the few-questions-asked payment breaks at the end of September.

The Central Bank has also said that customers in financial trouble are now best served by banks offering tailored solutions. However, it wrote to chief executives of the retail lenders in November to say that while “considerable efforts” had been made by the sector to introduce the payment breaks and draw up plans to support borrowers after the relief period ended, banks’ “high reliance on temporary and very short-term forbearance” was of concern.

The Central Bank also highlighted a “lack of innovation” in the range of loan forbearance options being offered to borrowers.

7 Couple in 80s have bankruptcy extended by five years