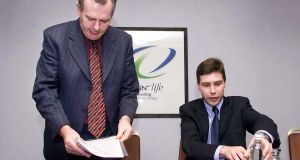 A director at one of businessman Sean Quinn’s former companies is seeking a restraining order after he was allegedly subjected to a “vicious attack”, the High Court in Belfast heard today.

Kevin Lunney’s lawyer claimed he was targeted earlier this month as part of a wider campaign involving arson attacks, firebombs and online harassment of other executives.

The company is made up of elements of the old business empire founded by Northern Ireland tycoon Sean Quinn.

Injunction proceedings have been brought against Fermanagh man Bernard McGovern. In court on Monday, barrister Peter Girvan, representing Mr Lunney, confirmed he was seeking an order to stop any further alleged harassment.

The application also involves securing an exclusion zone around the QIH executive’s home.

Mr Girvan claimed his client was “viciously attacked” in Co Cavan on February 1st. A criminal investigation into the alleged assault is being conducted by An Garda Síochána, the court heard.

According to Mr Girvan the incident formed part of a wider, “troubling” background in the area. “There’s been an harassment campaign against the directors and their families,” he said. “It includes arson attacks, firebombs and an online campaign.”

With Mr McGovern yet to secure legal aid funding, no submissions were made on his behalf.

But the judge, Mr Justice Maguire, was told a legal point may be raised about the court’s jurisdiction to hear the case. The application was adjourned until later this week.