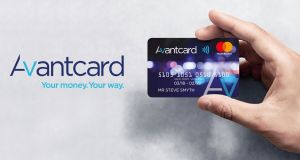 Spanish-owned consumer finance business Avantcard said it will create 40 new jobs in Leitrim to support growth in the business.

The Leitrim-based lender said the new positions will include customer facing roles to support the new An Post and Avantcard partnership as well as a handful of specialist roles to allow for planned growth.

The new jobs will be available at the company’s Carrick-on-Shannon headquarters and its Dublin satellite office.

“We had an incredibly busy 2018 as the business continues to expand and we look forward to building on that in 2019 with our new team members,” said Avantcard chief executive Chris Paul.

The company said it was proud to be a “major employer” in the north west region adding that the area offers a quality of living that major cities are struggling to match.

Avantcard was itself acquired last year by Spanish lender Bankinter which also bought the banking operations of EVO Banco in Spain.

Bankinter is focused on growing its consumer finance arm across different markets. It bought Barclays’s Portuguese business in 2016 and set up a new bank in Luxembourg in 2012.

1 Chris Johns: Economies may enjoy ‘roaring twenties’ if ministers learn lessons
2 Basic income for all: Has the Covid crisis given us a new economic model?
3 ‘I don’t need to do any of this. . .I don’t actually need to work.’
4 Pandemic brings a halt to Zara-owner’s Irish expansion
5 Profits jump threefold at LinkedIn’s Irish unit to $294.2m
6 Unilever’s Dutch and British arms merge after 90 years ahead of Brexit
7 Tourism jobs slump 25% as Covid-19 wreaks havoc on sector
8 How long can Government afford to keep State pension age at 66?
9 Spending by singles plummets 30% after retirement, study finds
10 Coillte wood supplies set to dry up next year
Real news has value SUBSCRIBE