Ex-INBS boss Fingleton told Deloitte ‘this is how we do things’, inquiry hears 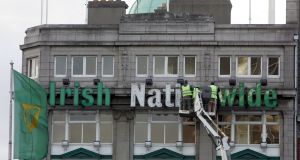 A partner with Deloitte Ireland, which reviewed Irish Nationwide Building Society’s (INBS) commercial lending practices before the financial crash, said that he was “surprised” at how relaxed the group’s managing director, Michael Fingleton, was about a number of negative findings contained in the report.

“In my experience, before and since, if I brought this type of report to another organisation, they would have had a completely and utterly different response to it,” said Colm McDonnell, a partner at Deloitte who led the review that was completed in February 2006. “Other clients would be somewhat embarrassed and certainly would have made an assertion to fix this problem, rather than ‘this is how we do things’.”

Mr McDonnell made his comments as he appeared as a witness before an ongoing inquiry into whether Mr Fingleton and four other former INBS executives were involved in the commissioning of seven alleged regulatory breaches between August 2004 and September 2008. INBS cost taxpayers €5.4 billion to rescue during the financial crisis, before its remains were put into liquidation in 2013 as part of the wind-down of Irish Bank Resolution Corporation (IBRC).

The first phase of the inquiry, which started public hearings last December and is drawing to a close, concerns allegations that the lender’s credit committee failed meet its terms of reference and review large loans in arrears and non-performing, management information systems (MIS) reports, credit review reports on top borrowers, and issues raised by internal audit, outsider advisers or regulators.

The Deloitte 2006 commercial lending review had three critical findings, including INBS’s non-adherence to internal policies and procedures, which could have included the credit committee’s terms of reference, Mr McDonnell said.

Deloitte also found in one of the reviews it was asked to carry out at INBS that the credit committee didn’t always have the required quorum when carrying out its work and that in some cases the committee approved loans that were larger than it was allowed to sanction. The committee could only approve loans of up to €1 million for much of the period under review.

The inquiry is due to start hearing next week from the four men subject to the investigation, starting with Tom McMenamin, INBS’s former head of commercial lending, on Tuesday June 5th. The other subjects of the inquiry are John Stanley Purcell, INBS one-time finance director, and Gary McCollum, who ran the society’s UK loan book from a Belfast base during the period under investigation.