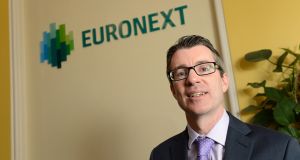 Euronext wrote off the value of the Irish Stock Exchange (ISE) brand last year, taking a charge of €1.6 million, after it acquired of the 226-year-old exchange from a group of Dublin stockbrokers.

While the Irish business has been rebranded as Euronext Dublin, its official company name remains The Irish Stock Exchange plc. Euronext, which also operates markets in Paris, Amsterdam, Brussels, Lisbon, Oslo and London, completed the Irish deal, which was valued at €167 million, in March 2018.

The latest set of accounts for the ISE, filed with the Companies Registration Office, show that the business swung into a net profit of €1.57 million last year from a €4.25 million loss for 2017.

The loss for the previous year came as it accounted for €13.5 million of takeover-related bonuses and other management windfalls ahead of the transaction being completed.

Then company chief executive Deirdre Somers was the main beneficiary, securing a €5.75 million payday before she quit in September last year.

The ISE, now led by chief executive Daryl Byrne, posted a €200,000 increase in revenue to €32.3 million last year, as it consolidated its position as the world’s main exchange for the listing of bonds.

As of the end of 2018, it had 34,572 debt instrument listings, representing an 11 per cent increase on the previous year.

The turnover of shares traded on the exchange was flat at €98 billion, with the effect of a 14 per cent increase in the number of trades offset by a decline in the value of stocks on the Irish market during the course of 2018.

The company’s cash position jumped to almost €42 million from €8.9 million in 2017, which was down to it reclassifying bank deposits that had previously been accounted for in its investments portfolio.

Euronext confirmed last week that it was in talks to buy the company behind the Madrid stock exchange, pitching itself against Switzerland’s SIX for one of Europe’s last standalone bourse operators.

1 Air travel never going ‘back to way it was’
2 Should I switch bank now with Ulster Bank at risk of closing?
3 Will brother’s widow get half of our parents’ estate when they die?
4 Household wealth jumps by 74% since last recession – report
5 Tourism and aviation players demand von der Leyen end EU travel chaos
6 ‘Tax war’ will hit Ireland if digital tax talks fail, OECD says
7 Tánaiste urges businesses to brace for Brexit with 100 days to go
8 House insurance: save yourself money by reviewing your policy
9 EU said to be leaning towards appealing Apple tax decision
10 Pallet manufacturer looks to imports as timber crisis takes root
Real news has value SUBSCRIBE