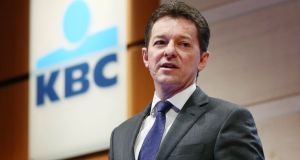 KBC Group chief executive Johan Thijs was forced on Friday evening to apologise for “insensitive” comments on the country’s tracker-mortgage scandal, which had drawn censure from the Minister for Finance and consumer activists.

“I would like to personally and sincerely apologise to our customers and to the Irish public for the offence caused by my words yesterday in relation to the tracker mortgage examination and investigation,” Mr Thijs said in a statement.

“I want to acknowledge the insensitivity of what I said and the manner in which it was delivered. It was unintentional and I am truly sorry for the offence caused.”

On Thursday, Mr Thijs criticised the Central Bank on a conference call with financial analysts for the regulator’s continued focus on the scandal, and said this “nitty-gritty stuff” was holding the industry back.

“What is still an annoying thing is all tracker mortgage stuff and, honestly, we would recommend to Central Bank of Ireland: come on, guys, turn the page,” Mr Thijs said. “We’re focused on doing business, we’ve learned our lessons, we know what to do.”

Minister for Finance Paschal Donohoe said on Friday that the comments will be “so upsetting to the 99 families in our country who lost their homes” as a result of the industry-wide debacle, affecting more than 40,000 borrowers.

He said the remarks unfortunately “remind me of the change that we still need to make in the culture in Irish banking”.

Mr Donohoe said the group chief executive of KBC “needs to give an acknowledgement now of what his comments mean to the 99 people who lost their homes here in Ireland”.

The Minister said while there had been changes in Irish banking, what angered him most was the response of the banks when the Central Bank was looking to complete its investigations into the scandal. The response of a number of banks was “truly unacceptable”.

“I would also like to acknowledge the crucial role played by the Central Bank of Ireland (CBI) in all regulatory matters, including the tracker mortgage examination,” Mr Thijs said on Friday evening. “ I want to express my support and respect on behalf of KBC for the role that the CBI plays in the regulation of banking in Ireland.”

Earlier on Friday, a new group set up by Ireland’s banks to help Irish financial institutions regain public trust described the KBC CEO’s criticism of the Central Bank the previous day as “unhelpful”.

The Irish Banking Culture Board (IBCB) – an independent industry initiative established recently and funded by the five retail banks in Ireland to demonstrate a change in behaviour by financial institutions – criticised the comments.

“Many innocent victims of the tracker mortgage scandal are still in the course of having their complaints resolved,” it said in a statement. “They cannot move on. The Central Bank of Ireland has still not completed its investigation into KBC and clearly is also not in a position to move on.

“The IBCB believes that Central Bank of Ireland’s regulatory role should be respected by all.”

Brian Hayes, chief executive of the Banking and Payments Federation Ireland, described Mr Thijs’s comments as “unfortunate”, but refrained from criticising them. “Those remarks were unfortunate at one level but at another they express a frustration at the length of time that the tracker scandal investigation is taking,” he said speaking on RTÉ Prime Time.

Fianna Fáil’s finance spokesman Michael McGrath called on Mr Thijs to apologise for his comments, which he described as “ill-judged, ill-informed and deeply hurtful”.

Financial adviser Padraic Kissane, who has led a long campaign on the issue, said Mr Thijs’s comments showed a “clear lack of empathy as to what had occurred”.

He added that the reason the investigation had taken so long was due to the length of time it had taken banks to acknowledge that they had been at fault.

Mr Thijs’s comments came just two days after Central Bank deputy governor Ed Sibley warned that bankers in Ireland and elsewhere were beginning to display echoes of pre-crisis hubris as pressure mounts on regulators to ease back on checks and controls introduced in the past decade to prevent another crash.

They also come amid continued anger by the public over the treatment of mortgage holders by banks.

It was recently revealed that officials at the Central Bank had to threaten to take some lenders to court in order to get them to co-operate with its examination into the tracker mortgage scandal, which has resulted in €693 million of refunds and compensation for affected customers.

KBC Bank Ireland is the last among five lenders in the State subject to a Central Bank enforcement investigation relating to the issue to put money aside for likely sanctions. Rival Permanent TSB was fined €21 million earlier this year for its handling of the industry-wide debacle.

Mr Donohoe last month noted that there was “still some considerable distance to go” in the reform of Irish banking culture.

He said that the tracker mortgage scandal, which affected more than 40,000 customers of Irish lenders, had resulted in a loss of trust and confidence that would “take considerable time and effort to restore”.

The Central Bank said it would not be commenting on Mr Thijs’s comments.