Bank moved to new building which can accommodate 1,000 staff 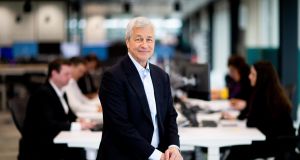 JP Morgan chief executive Jamie Dimon in 200 Capital Dock, which the bank agreed to purchase from the developers on a forward funding deal while it was still being built in 2017.

Profits at JP Morgan’s Irish unit more than halved last year to $7.7 million (€7 million) after it swallowed a $6.9 million hit on the lease for its old Dublin office.

JP Morgan last year left its old Irish accommodation, a rented five-storey building at 1 George’s Dock, and moved further down the quays to 200 Capital Dock, which was jointly developed by the National Asset Management Agency and Kennedy Wilson. The move created capacity that would allow JP Morgan to double its Irish staff to 1,000 people.

The bank agreed to purchase the new 200 Capital Dock building from the developers on a forward funding deal while it was still being built in 2017. Accounts for 2018 filed recently by JP Morgan Bank (Ireland), reveal the value of that transaction was about $156 million.

The accounts also show that JP Morgan took a charge on the lease for its old offices, in effect paying up the remainder of its $2.1 million annual rent until its 25-year lease ended sometime in 2021. That cost the bank $6.9 million.

The accounts for the Irish unit reveal, however, that all of its treasury operations moved last December to a branch of its Luxembourg operation. This resulted in the Irish unit’s assets declining by about $300 million to $1.1 billion.

Its 2018 sales for the year rose by $8 million to almost $150 million, but the gains were completely wiped out by its property restructuring. JP Morgan Bank (Ireland) had average “assets under custody” in Dublin of $310 billion.

The unit employed an average of 406 Irish staff over the course of 2018, but it is believed for that number to grow significantly in coming years as it expands the bank’s technology hub in Ireland.