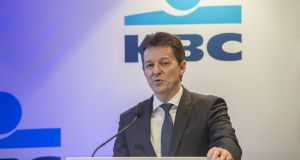 KBC Group chief Johan Thijs rounded on the Central Bank on Thursday for its continued focus on the tracker mortgage scandal and lenders’ other past sins, saying this “nitty-gritty stuff” is holding back the industry. “Come on, guys, turn the page,” he said.

The comments caused consternation on several grounds, not least because KBC has been one of the least forthcoming of Ireland’s lenders as the Central Bank sought to unravel how many people were affected by the crisis. It has also featured prominently in several other stories about errant behaviour by Irish banks.

Here are six reasons why KBC should have thought twice before taking on the regulator:

The bank is the last of Ireland’s mortgage lenders to admit the scale of the tracker mortgage problem among its customers, finally conceding that up to 1,661 of its mortgage borrowers may have been hit by overcharging.

KBC challenges the financial services ombudsman’s right to hear 27 complaints related to tracker mortgage issues, claiming they are out of time. Having been over-ruled, the bank had put out a statement saying that it would not challenge such cases a month previously, carefully avoiding mention of the fact that it was one of the lenders implicated by the ombudsman.

The case of a Kerry businessman who was overcharged just over €664,000 in interest by KBC after it wrongly withdrew his tracker mortgage rate emerges. His is one of the biggest cases of its kind in the tracker mortgage scandal. The bank denies the error cost the farmer his properties, which were subsequently repossessed.

It emerged in letters between the bank and the businessman that KBC started investigating incorrect interest charges on his account in 2017 – nearly two years after the Central Bank instructed the State’s lenders to review tracker mortgage issues.

The Central Bank instructs mortgage lenders they can no longer impose legal fees and other charges on borrowers in arrears who are co-operating with their bank to resolve the issue. Not only has KBC done so but it is one of two banks named by campaigners as having added interest to such charges, making their arrears position more intractable .

In the context of “moving on” and being “focused on doing business”, a reader writes to Pricewatch in The Irish Times to complain that it takes 10 working days for money to appear in his account when a cheque is lodged, and that cash lodgements are not allowed. He says these restrictions were never outlined to him when he opened his account.

More than two years after becoming the last Irish mortgage lender to admit the scale of its involvement in the tracker scandal going back more than a decade, KBC becomes the last to set aside money – €14 million – to cover an expected Central Bank fine as a result of enforcement action over the fiasco.