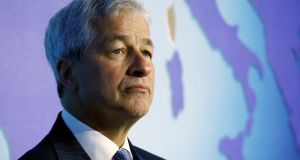 James Dimon, chairman of the board and chief executive of JPMorgan Chase, attends the Paris Europlace International Financial Forum in Paris. Photograph: Reuters

“We’re going to have to move several hundred jobs” on day one, which is pretty easy, Dimon said on Tuesday at a conference in Paris.

“I think people should focus more on the second step. If the EU determines over time that they want to move a lot more jobs out of London into the EU, they can simply dictate that.”

Global banks are preparing to move some London-based operations into new or expanded bases inside the EU after British prime minister Theresa May began the formal process for quitting the 28-nation bloc.

Before last year’s referendum, Dimon told UK employees that as many as 4,000 could ultimately be relocated in the event of Brexit. Three quarters of the bank’s 16,000 UK staff service EU customers.

“If regulators say one day we’re not comfortable with your risk people, your lawyers, your compliance being in the UK they can make us move it,” Dimon said. “We will be subject to what they do down the road and hopefully we can handle that and continue to serve our clients in the meantime.”

The firm’s EU investment banking operations will likely be based in Frankfurt, while custody will be located in Dublin and treasury services will be handled in Luxembourg, a person familiar with the bank’s plans said in March.

JPMorgan will initially move between 500 and 1,000 staff to the three cities and others in the region, the person said at the time.

1 Passengers face queuing in car parks at Dublin Airport
2 Major credit union plans to limit savings accounts to €40,000
3 Woodchester founder Craig McKinney dies
4 Ikea among major retailers to reopen next week
5 Angela Merkel sweeps in to save the euro zone
6 Revenue tells court it was entitled to raise €1.64bn tax assessment against Perrigo
7 Penneys will not reopen on Monday despite expected changes to lockdown rules
8 Credit union limit, Penneys stays shut, more stimulus and shopping for Ireland
9 Student accommodation sector set for harsh Covid-19 lesson
10 Brother is dragging his heels as executor of uncle’s will - is there anything I can do?
Real news has value SUBSCRIBE