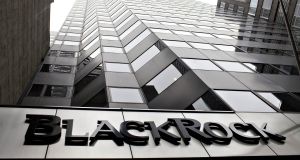 BlackRock headquarters in New York: The group is considering Dublin as an EU base. Photograph: Daniel Acker/Bloomberg/Getty Images

BlackRock, the world’s largest investment manager with $5.4 trillion (€4.75 trillion) of assets under management, is considering Dublin among a shortlist of potential European cities to set up a post-Brexit EU base.

Sources said that planning remains at an early stage and that the Republic, where it has almost 70 staff, is competing against Paris, Frankfurt and Amsterdam. The operation in Dublin is currently mainly made up of two businesses: providing management services to Irish-domiciled funds and investment advisory services to the group’s renewable power fund.

“BlackRock has not made any decisions yet as we wait until more information becomes available about what the UK’s exit from the EU will eventually look like,” a spokeswoman for the group said.

“Given BlackRock’s experience operating in multiple jurisdictions it remains well placed to meet its clients’ needs and has commenced efforts to lay the groundwork for our longer term response. As part of this effort, and in line with our broader strategy to grow our business in Europe, we are considering several options to increase our presence in key markets on the Continent.”

The European Central Bank and Bank of England each warned on Friday that some financial groups’ Brexit plans are not good enough as regulators scrutinise firms’ strategies to deal with a potential abrupt cut-off in cross-border financial links under a “hard Brexit”. The Bank of England has given companies that it regulates until July 14th to submit plans for how they plan to deal with the UK’s departure from the EU at the end of March 2019.

BlackRock Investment Management Ireland Holdings, the US group’s main Irish entity reported a £36.2 million (€41.3 million) net profit in 2015, up from £31.8 million for the previous year, and driven by an increase in dividends from investments, according to its most recent annual report. Net assets at the unit rose to £424.2 million from £388 million.

BlackRock’s chief executive officer, Larry Fink, said at a conference at the end of May that it remains unclear how much of the group’s business in the UK may have to move to elsewhere in Europe under Brexit.

Meanwhile, South Korea’s Mirea Asset Financial Group, which has $100.5 billion of assets under management, has signalled it plans to set up a global trading headquarters in Dublin.

The firm, which was founded in 1997 in the wake of the Asian currency crisis, decided against setting up a centre in London because of the EU divorce talks.

“We saw there weren’t many options in Europe,” a spokesman for the firm told the Korean Times. “The choice was London, Frankfurt or Dublin. We did not opt for London because of Brexit.”

Ireland has had mixed success so far in the race among financial hubs across the EU to lure activity from the City of London in the wake of last year’s Brexit referendum.

Barclays, JP Morgan, Bank of America Merrill Lynch among the firms planning to expand in Dublin as companies in the UK prepare to lose the right to passport financial services across the EU as the country leaves the union.

Two weeks’ ago Lloyds of London insurer Chaucer said it has secured approval from the Central Bank to set up a Dublin subsidiary, while Standard Life is considering making Dublin its EU hub as a result of Brexit.

1 How long can Government afford to keep State pension age at 66?
2 Guinness brings out a non-alcoholic version of the black stuff
3 How much will a Covid-19 vaccine cost?
4 How on earth do we the calculate the cost of Level 5 for the Irish economy?
5 Learner drivers could pay €600 more in insurance due to test delays
6 Farm lobby seeks EU ban on vegan ‘burger’ and veggie ‘sausage’
7 Irish start-up Wayflyer raises €7.8m in seed funding
8 Google's incredible power is the result of decades of regulatory failure
9 Ireland’s Covid-19 economy in five graphs
10 Paul Coulson plans record $1.8bn Ardagh investment
Real news has value SUBSCRIBE