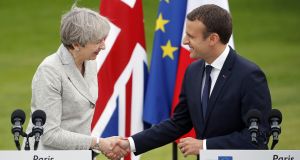 Leaders of big European and global banks including JPMorgan Chase chief executive Jamie Dimon and HSBC Holdings’ Stuart Gulliver are meeting in the French capital on Tuesday to discuss the future of banking in Europe.

Prime Minister Edouard Philippe, who last week announced three finance-friendly initiatives, will give the keynote speech to the annual forum organized by Paris Europlace, its main financial lobby group, in an attempt to win business from London.

Until now, stiff firing and hiring rules, a reputation for high taxes and a spike in political risk during this year’s presidential election held back Paris’s efforts to win jobs as the UK prepares to quit the European Union.

While Frankfurt and Dublin have garnered several relocation commitments, HSBC is the only major international bank that has publicly expressed a preference for Paris.

But French politicians and executives say they have more cards to play as president Emmanuel Macron, a former investment banker, prepares to cut taxes and overhaul French labour law.

While banks including Standard Chartered and Nomura Holdings have picked Frankfurt as their new EU base, any flow of jobs out of London is likely to be slow and scattered across several cities, meaning that Paris, home of four systemic lenders and a large asset-management industry, can get a slice of the pie, said Arnaud de Bresson, Paris Europlace’s managing director.

Paris is hoping to lure 20,000 jobs from the UK as firms seek EU locations to secure continued market access to the bloc, according to Paris Europlace.

HSBC, which has a French retail bank, has said it may relocate as many as 1,000 traders to the French capital. JPMorgan, the US’s largest bank, plans to move hundreds of London-based bankers to Dublin, Frankfurt and Luxembourg “in the short term,” Daniel Pinto, head of its investment bank, said in May.

Paris ranks 29th on the ranking of Global Financial Centres Index by Z/Yen Group, just above Casablanca and behind Munich. London tops the list, followed by New York and Singapore.

The index, which is updated every six months, was compiled from an on-line survey of more than 3,000 financial professionals and it also uses gauges in areas such as business environment, human capital and infrastructure.

Virtually all executives and bankers consider Macron’s election as shifting sentiment following last year’s Brexit referendum and as Donald Trump became president of the U.S. after campaigning on a protectionist promises. Macron’s action to reform the job market is seen as critical. Last month, a Brexit report from a committee at France’s senate warned that three bankers could be hired in Frankfurt for the cost of two in Paris.