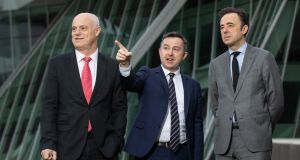 Speaking at an event in Dublin, José Manuel Campa said Mr Cross’s nomination had become entangled in a spat between the parliament and the banking authority, but that Mr Cross was still the most qualified candidate for the job.

Mr Cross, who currently serves as the Central Bank’s director of financial regulation, policy and risk, is already a member of the EBA’s board of supervisors.

His elevation to the role of executive director should have been routine but it coincided with a row over outgoing EBA director Adam Farkas, who resigned to head up the lobby group, the Association for Financial Markets in Europe (Afme).

MEPs are angry that Mr Farkas’s move to major banking industry lobby group poses a conflict of interest and that his exit terms are too lenient. The EU ombudsman, Emily O’Reilly, has opened an investigation into the conditions the EBA imposed on Mr Farkas’s departure to Afme.

Members of the European Parliament’s economic affairs committee on Thursday voted down Mr Cross’s nomination to replace Mr Farkas by 27 to 24.

At a two-day hearing prior to the vote, committee members also highlighted the fact Mr Cross previously worked for Afme before taking up a position with the Central Bank here.

Mr Campa insisted there was no issue or conflict of interest with Mr Cross’s candidacy, noting that he had worked for the Afme over five years ago, and that his appointment had been frustrated by “current sensitivities”.

“I think the timing of this has been unfortunate,” he said. “We’re not happy about the fact that the European Parliament does not agree with our candidate for executive director,” he said.

Mr Campa, who was attending a conference in Dublin hosted by Banking and Payments Federation Ireland (BPFI), said he was still hopeful that Mr Cross’s nomination may still be passed by a vote in the full parliament, either later this month or in February.

The Central Bank has declined to comment. Mr Campa said the EBA’s move from London to Paris as a result of Brexit – Dublin had been the alternative choice – had been relatively seamless with a low level of staff attrition.

On the outlook for banking in Europe, he acknowledged the current of era of ultra low interest rates had dented profitability across the sector. However, he noted that lower rates boosted growth and asset prices, which decreased non-performing loans (NPLs) and provisioning for NPLs.

Mr Campa said the main risk for the sector was if the macro-economic environment deteriorates and bad loan levels rise again.