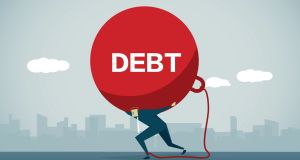 The average non-performing loans ratio of small businesses in the Republic peaked at 30 per cent in 2013, according to Central Bank data.

Irish banks face a fresh spike in bad small business loans and restructured mortgages tipping back into default if there is a hard Brexit or if the economic cycle falls into recession, according to debt ratings firm Scope Ratings.

About 11 per cent of small to medium-sized enterprise loan balances originated by three major Irish banks were non-performing in 2018, and this is likely to grow substantially in a stressed economic climate, Scope Ratings said.

The ratings company said that while Irish banks are sitting on higher capital cushions, measured as common equity Tier 1 capital ratios, than some European counterparts to absorb shock losses, their level of provisioning against expected loan losses is lower and “warrant caution”.

“Since the peak of the crisis in 2013, Irish banks have undergone drastic deleveraging through portfolio sales and, more recently, securitisations, bringing the non-performing exposures ratio down to 4.6 per cent by June 2019,” Scope said.

The average non-performing loans (NPLs) ratio peaked at 30 per cent in 2013, according to Central Bank data.

“These positive trends have been driven by strong economic growth, which has pushed up house prices by a staggering 85 per cent since 2013 and made mortgage portfolios more attractive to credit investors, allowing banks to reduce reserves,” Scope said.

However, the firm said that banks face a “rocky road ahead” on the NPLs front, as economic risks rise and banks face growing political opposition to the sale of their most problematic mortgages.

Permanent TSB and Ulster Bank sold portfolios of owner-occupier loans in the second half of the year. Elsewhere, AIB, which has offloaded billions of euro of commercial loans in recent years, has begun to line up a portfolio of soured home loans, called Project Birch, with a view to launching a sale in the coming months.