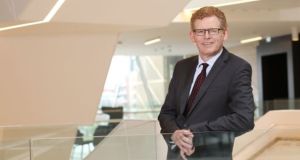 Top Central Bank official Gerry Cross has been rejected for a role that would have seen him become second in command of the European Banking Authority (EBA) due to his former work as a lobbyist.

Mr Cross, who currently serves as the Central Bank’s director of financial regulation – policy and risk is already a member of the EBA’s board of supervisors and co-chairman of its standing committee on regulation and policy.

He had been nominated by the European banking regulator to become executive director. However, members of the European Parliament’s Committee on Economic and Monetary Affairs on Thursday voted down his nomination by 27 to 24.

The Paris-headquartered European Banking Authority was established in 2011 with the objective of maintaining financial stability in the EU and safeguarding the orderly functioning of the banking sector. It conducts stress tests on European banks.

Fianna Fáil’s Billy Kelleher voted to confirm the Irish candidate in the post. Sinn Féin MEP Matt Carthy is a substitute member of the committee and so did not have a vote.

Mr Cross had sought to reassure politicians at a confirmation hearing on Wednesday he would not be unduly influenced by the banking sector. The Irishman once worked for the Association for Financial Markets in Europe (Afme), a lobby group representing lenders.

Politicians had been angry that former EBA executive director Adam Farkas – whom Mr Cross had been expected to succeed – left the regulator to head the lobby group in February on conditions they saw as too lenient.

The EU ombudsman has opened an investigation into the conditions EBA imposed on Mr Farkas’ departure to Afme.

“As a former lobbyist for the banking sector, it is not appropriate for him [Mr Cross] to be the top EU banking supervisor. The revolving door must be stopped! And we need more women in top jobs,” said Mr Fernandez.

His views were echoed by others who turned down the nomination of the Irish central banker.

Mr Giegold said voting down the nomination was a “strong signal against the power of the banking lobby in Brussels. Such conflicts of interest undermine trust in EU authorities,” he added.

“One of my last acts and MEP was to vote against Gerry Cross, who is a former finance lobbyist and we feared would be too weak on banking regulation,” said Ms Cato.

Mr Farkas agreed to an 18-month ban on advising Afme and its members on topics directly linked to his work during his three years at EBA although, under questioning, Mr Cross conceded that policing the conditions would be a challenge.

Before joining the Central Bank, he had worked at the European Commission, the UK Financial Services Authority, Fortis Group, the Institute of International Finance and the Association for Financial Markets in Europe.

The Central Bank said it would not be commenting.