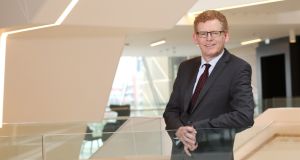 If appointed to the EBA, Mr Cross will have to resign his position as director of financial regulation, policy and risk, at the Central Bank of Ireland. Photograph: Jason Clarke

Gerry Cross, a director at the Central bank of Ireland, has been nominated to become second in command of Europe’s influential banking authority.

The board of supervisors of the European Banking Authority (EBA) yesterday nominated Mr Cross to take up the position of executive director, a role that sits just below that of chairman.

The Paris-headquartered European Banking Authority is a regulator which conducts activities including stress tests on European banks. It was established in 2011 with the objective of maintaining financial stability in the EU and safeguarding the orderly functioning of the banking sector.

If appointed, Mr Cross will have to resign his position as director of financial regulation, policy and risk, at the Central Bank. He will first have to appear before a public hearing of the European Parliament’s Committee on Economic and Monetary Affairs.

After confirmation from the parliament, Mr Cross will be appointed for a renewable five year term.

Mr Cross is already a member of the EBA’s board of supervisors and is co-chairman of its standing committee on regulation and policy. Before joining the Central Bank, he worked at the European Commission, the UK Financial Services Authority, Fortis Group, the Institute of International Finance and the Association for Financial Markets in Europe.

The necessity for his appointment follows Adam Farkas’ decision to leave his position as executive director of the EBA to become head of the Association for Financial Markets in Europe, a lobby group representing lenders. He will take up that role next month.