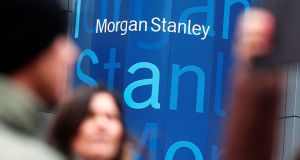 A boom in trading propelled a 46 per cent jump in Morgan Stanley’s profits for the final quarter of the year. Photograph: Shannon Stapleton/ Reuters

Morgan Stanley wrapped up Wall Street’s earnings season on a high, reporting its best annual earnings and revenues after a boom in trading propelled a 46 per cent jump in the bank’s profits for the final quarter of the year.

The bank, the last of Wall Street’s big players to report fourth quarter numbers, made net income of $2.2 billion in the final three months of the year, far better than the $1.7 billion predicted by analysts in a Bloomberg poll. Annual net income was $9 billion, up 3 per cent year on year.

Fourth-quarter revenues of $10.9 billion were comfortably ahead of the $9.725 billion analysts expected. Fixed income revenues more than doubled to $1.3 billion, a better result than the bank’s peers which also saw big gains from resurgent bond trading in the final months of 2019.

Shares were traing close to 8 per cent higher after chief executive James Gorman set out significantly higher shareholder return targets, with a long-term goal of return on tangible equity of as much as 17 per cent – well ahead of its 13 per cent return for 2019.

“We delivered strong quarterly earnings across all of our businesses,” chief executive James Gorman said. “Firm-wide revenues were over $10 billion for the fourth consecutive quarter, resulting in record full year revenues and net income. This consistent performance met all of our stated performance targets.”

The quarter included $172 million of severance costs from what Morgan Stanley described as a “business unit and infrastructure December employee action”. The FT and other media reported in December that Morgan Stanley was cutting 1,500 jobs worldwide, as it battened down the hatches ahead of an uncertain 2020.

Institutional securities, which houses Morgan Stanley’s equity and fixed income trading activities, was the biggest contributor to the increase, with revenues up 32 per cent to $5 billion and net income rising 47 per cent. Morgan Stanley also posted a best-in-class fourth quarter result in investment banking, with revenues rising 11 per cent year on year, driven by strong results from issuing bonds and running IPOs.

The results cap off a mixed season for Wall Street. Soaring fixed income trading revenues were a feature across the pack, but group-wide results ranged from JPMorgan Chase’s 21 per cent year-on-year increase in quarterly profits to Goldman Sachs’ 26 per cent fall. – Copyright The Financial Times Limited 2020