Banking & Payments Federation of Ireland cites ‘only 9,500 homes’ repossessed since 2009 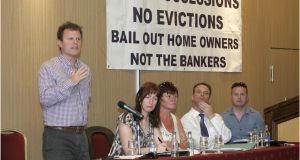 A protest meeting over repossessions in 2011. According to Standard & Poor’s, the legal process for repossession can typically take as long as 42 months in Ireland. File photograph: The Irish Times

Claims that Ireland would suffer a “tsunami of repossessions” in the wake of the financial crash have been entirely debunked with only 9,500 homes repossessed since 2009, the Banking & Payments Federation of Ireland (BPFI) has said.

The banking lobby group said the repossession rate here was extremely low by international standards and had fallen “at the very time when portfolio sales to funds have been increasing”.

It cited recent data from the Central Bank showing just 9,507 householders have lost possession of their homes since September 2009, 3,142 (33 per cent) by court order and 6,365 (67 per cent) by voluntary surrender.

In a position paper, the BPFI defended the sales of non-performing loans (NPLs) to third-party investment funds suggesting they provided benefits for banks in terms of healthier balance sheets while maintaining consumer protections for borrowers.

The scale of NPLs on bank balance sheets in the Republic has fallen from nearly 15 per cent at the high point of the crash to 5 per cent.

The reduction has been achieved through internal workouts, restructurings and most controversially through the sale of loans to third-party investment funds, many which pay little or no tax.

The BPFI said, however, that a number of false claims have been made about the NPL sales process, chief among them was that it would result in a “tsunami of repossessions”.

“It’s really around the old parable about the boy claiming that the sky is going to fall in,” said BPFI chief executive Brian Hayes.

“How long do you have to wait before the sky falls in?” he asked, noting there were just under 28,000 mortgage accounts in long-term arrears of more than 720 days.

Referencing the fact that the Central Bank plans to publish details about this cohort of borrowers and the attempts by banks to repossess some these homes, he said: “We’ll soon find out who is telling the truth about this and who is gilding the lily for their own interests.”

In some cases, Mr Hayes said borrowers have not being paying “for a very considerable period, much more than two years”.

“Investment funds are a crucial part of the solution to mortgage arrears and it’s important that these arguments are made public,” he said.

In response to the BPFI paper, David Hall, chief executive of the Irish Mortgage Holders Organisation, said the language used by the federation in “dismissing the fact that so far 9,500 families/individuals have lost their homes is typical of the contempt by which banks and funds view those who can’t pay their mortgage. The timing is interesting ahead of what I understand will be a significant number of repossession proceedings being issued later this year.”

However, Mr Hayes insisted that the repossession route was very onerous for banks and only entered into as a last resort. It is no great surprise that most of the repossessions here were via voluntary surrender, he said.

Mr Hayes said it was in the interests of banks to turn these debts into long-term workable solutions “and yes in some cases that involves selling them on”.

“This issue about who are the investment firms, who are they representing? They effectively represent pension firms, pension funds in the US made up of very ordinary people, who see this as part of a portfolio in which they can make a return,” he said.

Mr Hayes also rejected claims that these funds did not offer forbearance measures similar to those from banks, noting that many had put in place workable arrangements for distressed borrowers.