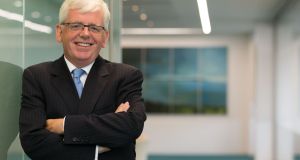 Ulster Bank has announced the appointment of Des O’Shea as its new chairman.

Mr O’Shea follows Dr Philip Nolan, who will leave the board of directors following eleven years of service, including four years as chairman.

“On behalf of RBS and Ulster Bank, I would like to thank Phil for his unwavering professional drive and personal commitment to Ulster Bank and its customers over the past eleven years,” he said.

“Des has served on the board of Ulster Bank for four years and brings not only an in-depth knowledge of the Irish market but 36 years of financial services experience.

“He has held a number of international banking positions, including directorships in private and publicly quoted institutions across Europe, Asia and further afield.

“I look forward to continuing to work with him toward our shared ambition of being the number one bank for customer service, trust and advocacy.”

Mr O’Shea was appointed to the board of Ulster Bank in November 2012 and is chairman of the audit committee as well as a member of the risk committee.

He is also a non-executive director of Byblos Bank SAL (Lebanon) and Pepper Australia Pty. He retired from GE Capital in November 2011 after 14 years, during which he held a variety of senior roles, including senior vice president from 2003.

A native of Co Cork, Mr O’Shea is also a UCC Graduate and a chartered accountant.

Irish pharma sector warns of protectionism as US corners supply

1 Can we finally say farewell to the scourge of hot-desking?
2 Big Four told to outline plans for audit split in UK by October
3 Why gift a son now if it eats into his tax-free inheritance threshold?
4 Irish pharma sector warns of protectionism as US corners supply
5 Mortgage arrears: Prevention is definitely better than cure
6 NTMA to raise up to €1.5bn before stimulus plan
7 Chris Johns: Economic self-harm is the root of populism
8 Government to avoid ‘cliff-edge’ on Covid-19 payment changes
9 Flights abroad ban could last all summer
10 Irish firm teams up with Salt Edge to simplify mortgage process
Real news has value SUBSCRIBE