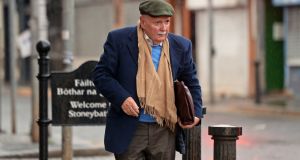 Michael Fingleton informed officials by phone that while he would have liked to attend INBS hearing, he was unable due to the short notice. Photograph: Eric Luke / The Irish Times

An inquiry into the actions of five former Irish Nationwide Building Society directors and senior staff in the lead up to the financial crisis has heard that key documents being sought by one-time society chairman Michael Walsh will not be ready until the middle of September.

Mr Walsh was not at a hearing on Thursday, the first public session since the inquiry was set up late last year, but was represented by his legal team. The other four former INBS figures, including Michael Fingleton, who led the society for 38 years until 2009, were not represented.

All five men were informed by letter from the Central Bank’s regulatory decisions unit (RDU), which provides administrative support to the inquiry, almost two weeks’ ago that a meeting would be held on Thursday regarding how the process would be managed.

Mr Fingleton (79) informed the RDU by phone that while he would have liked to attend, he was unable due to the short notice, the public session heard.

The RDU did not hear back from the other three men or their legal representatives, John Stanley Purcell, the now-defunct society’s former finance director, Tom McMenamin, a former commercial lending manager, and Gary McCollum, who once headed the society’s UK lending from a base in Belfast.

INBS cost taxpayers €5.4 billion to bail out as its bad loans soared following the property crash. The lender was folded into Anglo Irish Bank in 2011 and the new group was renamed Irish Bank Resolution Corporation, which itself was put into liquidation in February 2013.

The first public hearing of the case last November heard that the five men are accused of failing to ensure that commercial loan applications were processed and later approved correctly.

The Central Bank also alleged that INBS failed to obtain proper security for commercial loans and it suspects that proper valuation reports on assets were not received and that internal loan-to-value limits were breached.

It is also alleged that the executives failed to ensure that commercial lending was effectively monitored in line with internal policies. The inquiry has the power to impose fines of up to €500,000 on the individuals.

A number of meetings held by the inquiry this year had taken place in private, following advice from the Director of Public Prosecutions, having regard to other legal proceedings. As this concern no longer exists, the hearings will be largely held in public in future, the inquiry’s chairwoman Marian Shanley said.

The inquiry heard that Mr Walsh is looking for a series of documents, including reports by regulatory inspectors in relation to the alleged contraventions, material that passed between INBS’s auditors and the Central Bank during the period of the review between August 2004 and September 2008, and all documents relating to meetings attended by Central Bank officials and INBS officials during that timeframe.

Andrew Harbison, director of forensic and investigations services at Grant Thornton, which is assisting the Central Bank’s RDU, said he “would be very positive” about having the documents sought by Mr Walsh prepared by September 8th.

He said his team plans to rely on the latest computer technology to initially scan through documents to extract potentially relevant material, rather than using traditional manpower that would require 600 “review days”.

Once the material is filtered, experienced reviewers would then go through the relevant documents in order to reach the September deadline, he said.

“The inquiry members are very concerned that all necessary steps are taken to deliver the documents,” Ms Shanley said, adding that September 8th was a “hard deadline and we’d expect it to be adhered to”.

1 In six months we will be in the grip of a 1980s-style recession
2 Angela Merkel sweeps in to save the euro zone
3 Don’t expect a bonanza for Ireland from the EU’s €750bn recovery cash
4 Property price drop of up to 12% this year a ‘reasonable’ assumption – McDonagh
5 What will it take to reopen the world to travel?
6 Perrigo tells court of ‘very high level of unfairness’ in €1.64bn Irish tax bill
7 Remaining McDonald’s drive-through restaurants now open
8 Emirates to restart flights from Dublin to Dubai this month
9 Lotto sales hit €884m last year but Covid-19 may halt Winning Streak
10 Chartered Land moves closer to approval for Dublin’s tallest tower
Real news has value SUBSCRIBE