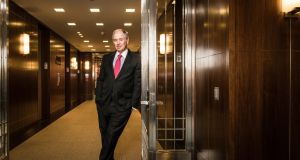 Blackstone Group is seeking to raise up to $3 billion in its first Pan-Asia buyout fund for investments in sectors including high-end manufacturing and healthcare, people familiar with the plan told Reuters.

Blackstone, which has significant Irish operations including the acquisition of the Blanchardstown Centre in Dublin in August 2016, is the largest manager of private equity and real estate assets in the world.

The company, seen as bellwether for the alternative asset sector, now manages a record $371bn worth of assets, a 4 per cent increase year on year, the company said in a statement.

The firm has informed its limited partners about the plan and it aims to lock in the first tranche of investment for the fund by the end of 2017, according to those familiar with the plan.

The size of the fund has not been finalised and could be bigger than $3 billion, one of the people said.

The fund will focus on buying controlling or significant minority stakes in sectors such as healthcare, high-end manufacturing and services, and the so-called consumer upgrade sector - goods and services geared to consumers who want to upgrade their lifestyles, another person familiar with the plan said.

“The fund will mainly look at China, India, Southeast Asia, Australia and Korea, and could be planning to invest in Japan as well,” this person said, adding that Blackstone’s global private equity fund will also contribute around 40 per cent to the investments that the Asia fund makes.

Buyout firm TPG Capital Management was seeking to raise more than $4 billion for an Asia-focused fund, Reuters reported last September. The firm has yet to announce the completion of the fundraising.

Returns above 20 per cent are considered a reasonable return for private equity funds.

Blackstone’s previous investments in Asia were from its global funds. It most recently raised $17 billion for a global buyout fund in 2015.

The firm’s $4.8 billion BEP II fund, which started investing in 2015, recorded a 47 per cent net IRR by the end of the first quarter of this year, its latest quarterly report shows.

However, its biggest ever private equity fund - the $21 billion BCP V, which completed investments in 2011 - has also been one of the firm’s worst performer with an 8 per cent net IRR as of the end of March.

Blackstone private equity funds have invested more than $1.5 billion in India since 2015. This included buying a majority stake in Indian IT outsourcing services provider Mphasis Ltd (MBFL.NS) from Hewlett Packard Enterprise Co last year for as much as $1.1 billion.

Blackstone has also invested in companies in New Zealand and Australia in the past three years.

It led a consortium to acquire Chinese information-technology outsourcing firm Pactera Technology International Ltd in 2014 and last year sold it to a unit of Chinese conglomerate HNA Group for about $675 million in cash.

The sale handed Blackstone a return of more than one-and-a-half times its initial investment, the Wall Street Journal report at the time.

Blackstone separately will launch a $5 billion Asia-focused real estate fund around the beginning of next year, Reuters reported in January.