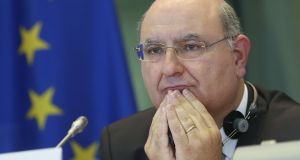 Europe’s insurance watchdog warned national regulators on Tuesday not to undercut one another in their attempts to attract firms moving from London because of Britain’s exit from the European Union.

London-based financial services firms have been making plans to set up operations in the EU to maintain access to its single market after Brexit and there is fierce competition among major European cities to attract them.

As a result, the EU regulator is concerned about the risks of new “letterbox” companies springing up in the EU that delegate key operations to parents in London. It has said that any countries offering such flexible solutions to attract business could undermine stability.

Any regulatory leeway at the national level “is not a means for lowering standards or for disregarding prudential requirements,” the European Insurance and Occupational Pensions Authority said.

The authority said regulators should ensure that firms setting up shop in the European Union should exhibit “an appropriate level of corporate substance, proportionate to the nature, scale and complexity of the planned business.”

This includes a reasonable level of local staff, it said. Regulators must also allow sufficient time for the application process and not take short cuts.