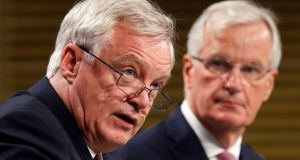 EU chief negotiator Michel Barnier has warned of “fundamental divergences” in the EU and UK approaches to the Brexit talks, notably on the role of the European Court of Justice in defending citizens’ rights and on the UK’s Brexit bill.

Mr Barnier and David Davis, the UK’s Brexit minister, were speaking at the end of a round of what diplomats called “constructive” and “robust” talks that they say have done much to clarify the respective positions of both sides.

But Mr Barnier said that EU citizens in the UK after Brexit needed a degree of judicial certainty that only the European Court of Justice could provide, and that UK proposals on citizens rights were deficient on the rights of future family members and the right to export social benefits.

The UK on Thursday night accused the EU of not being willing to safeguard the future rights of UK citizens living in the EU to move residence around the bloc. But UK officials admitted that they had seen in the talks a willingness on both sides of the court issue to find a “landing zone” somewhere between the two positions.

UK negotiators in the Irish strand of the talks were sent off to do what one diplomat called “more homework” ahead of the next round of talks.

“We agree that the important issue of the Good Friday Agreement [Belfast Agreement], in all its dimensions, requires more detailed discussions,” Mr Barnier told journalists. “In particular, more work needs to be done to protect North-South co-operation between Ireland and Northern Ireland. ”

That is a reference to 12 areas of co-operation specifically referred to in the agreement, ranging from agriculture, to energy and tourism, and which are now provided for in EU law.

The UK has been asked to explain how it intends to preserve such programmes and “the UK should clarify in the next session”, Mr Barnier said, “how it intends on maintaining the Common Travel Area after leaving the EU”.

But diplomats said they believed that in the Irish strand the two sides were on the same page and that an agreement could be reached that would show the required “sufficient progress” by the October deadline, when heads of government of the EU27 will decide if trade talks with the UK can begin.

Reflecting on the thorniest issue the talks face, the UK “financial settlement”, Mr Barnier said that only its acknowledgment in the House of Commons last week that it would honour financial obligations to the EU, though not their scale, had allowed the talks this week to proceed. But Mr Davis refused to be drawn on whether he understood that commitment to imply a “net flow” of any kind from London to Brussels.

UK officials made clear that they intend to question every line in the European Commission’s paper on the financial settlement , and “fight for every penny”. Making “sufficient progress”, even on agreeing a methodology for calculating the UK’s liabilities, is likely to be very difficult.

In response to the suggestion that the EU did not appear to be willing to compromise on its demands, Mr Barnier said that it was “not yet the time for compromises. Now we are in the business of clarification.”

The talks resume in Brussels at the end of August.