‘Even a woman can drive a train’: Hammond in row over jibe 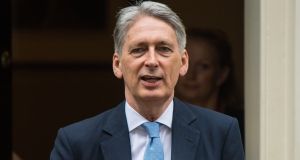 Chancellor Philip Hammond who has reportedly annoyed the prime minister with a sexist remark. Photograph: PA

British chancellor Philip Hammond appears to have irked prime minister Theresa May by making a sexist remark in cabinet, exposing the tensions at the highest level of government.

Reports suggest that in a discussion about transport, the chancellor quipped that driving trains had now been made so easy that “even a woman” could do it.

A report in the Sun newspaper, which was not disputed by senior Conservative sources, said Mr Hammond had made the remark, only to be rebuked by Ms May.

Mr Hammond has been increasingly assertive in the Brexit debate since the general election wiped out the government’s majority, urging a close continuing relationship with the European Union.

He is one of the figures regarded by restive Tory MPs as a potential leader to steer the party through the rough waters of Brexit.

Ms May herself joked on the BBC’s One Show during the campaign that there are “boy jobs and girl jobs” in No 10 - with her husband, also called Philip, taking out the bins.

But she is determined to reassert her authority and appears not to have been amused by the remark.

As Mr Hammond continued speaking, she reportedly said: “chancellor I am going to take your shovel away from you” - a reference to Denis Healey’s adage: “When you’re in a hole, stop digging.”

One other minister present said the claim the pair had fallen out over the joke was “heavily exaggerated”, but the emergence of the embarrassing anecdote underlines the touchy relations in Downing Street.

Tensions in the cabinet have repeatedly surfaced since the party’s disastrous election campaign, with foreign secretary Boris Johnson and Brexit secretary David Davis both regarded as potential candidates should Ms May decide to step aside.

Labour MP Mary Creagh, who clashed with Mr Hammond in the House of Commons over what she claimed was sexist language, tweeted: “chancellor called me hysterical a couple of months ago. Now it’s the turn of train drivers.”

Ms May’s government has frequently struggled to present a united front since the election, with ministers sending contradictory messages about priorities in the Brexit negotiations.

Mr Davis, regarded by many backbenchers as her most likely successor, will resume talks in Brussels with the EU’s chief negotiator, Michel Barnier, on Monday.

The prime minister’s hiring of a new communications director, former BBC executive Robbie Gibb, earlier this week, is aimed at combating the “weak and wobbly” image that began to dog her during the campaign.

In the immediate aftermath of the election result, it sometimes appeared likely that May’s premiership would not survive - but after striking a confidence-and-supply deal that means the 10 MPs of Northern Ireland’s Democratic Unionist party will back the Conservatives in key votes, she now looks safe for the time being.

However, the publication of the EU (withdrawal) bill - the key piece of legislation enacting Brexit - sparked a barrage of criticism this week, and the government is likely to face a tough challenge in getting it through parliament in the autumn.

Mr Hammond is known as having a dry sense of humour in private; but what he may have regarded as a lighthearted remark appears not to have amused the prime minister. Treasury spokespeople were unavailable for comment on Friday night.