So-called ‘branch-back’ plans may mitigate the need for new operations in Dublin, Frankfurt and Paris 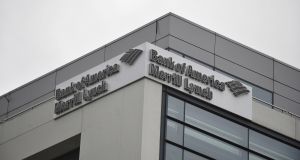 Bank of America Merrill Lynch is already beefing up its Dublin operation but other UK based banks may look at keeping the bulk of their operations in London post-Brexit. Photograph: Aidan Crawley

Big US banks are drawing up “stop gap” Brexit plans in an attempt to avoid moving hundreds of jobs out of London once the UK leaves the EU and before they have had time to recruit specialist staff in the European bloc.

Morgan Stanley, Citigroup and Bank of America are among the banks planning to use London branches of their EU subsidiaries to smooth the process of building new headquarters on the continent, according to five people briefed on the plans.

One banker involved said the option — dubbed “branch-back” by lawyers — was “the simplest arrangement” available that offered “less costs, less disruption and movement”. Branch-back is essentially a reversal of the current set-up, where US banks tend to use their London operations to “passport” their services across the rest of the EU.

A second banker said using London branches of EU divisions was “a reflection of the fact that hiring [BACK OFFICE]staff is tight in the EU in the investment banking market; it’s easier in retail, sales and trading”.

However, the plans risk antagonising European regulators, who may resist moves by banks to keep staff who are handling transactions with EU clients in the UK along with much of the capital associated with the activities.

For the plans to work, UK authorities would also need to allow investment banks based in the rest of the EU to continue operating in Britain through more lightly regulated branch structures.

“All of us aren’t quite sure yet where the UK regulators will come out in terms of how they treat branches of EU entities,” said the first banker. Banks would argue for newly created branches to receive the same treatment as existing ones, like the big London branch that Deutsche Bank uses for its European investment bank, the banker added.

BofA is in the process of merging its UK bank into its Irish operation to make it a branch of its Dublin-based subsidiary and establishing a similar structure for its European broker-dealer. One banker involved in the move said the merger was part of worst-case scenario planning. It is set to be completed by July next year.

Citi already has a UK branch of its Dublin-based bank Citibank Europe, and a UK branch of the German entity that it is repurposing as its EU broker-dealer. Both branches will be more extensively used after Brexit, subject to regulatory permissions, a person familiar with Citi’s plans said.

If successful, the plans could provide a boost to the City of London, following warnings that, as Europe’s current financial heartland, it faces an exodus of talent. A report by Oliver Wyman consultancy estimated that Brexit could cost up to 75,000 jobs in the UK’s financial services sector while the Bank of England expects 10,000 immediate job losses in the event of a hard Brexit. Representatives from Frankfurt, Paris and other continental cities have been eagerly courting banks in an attempt to snag some of those jobs.

The strategies by the US banks have emerged after they confided in Wilbur Ross, their US commerce secretary, while he was in London over their dismay at the state of Brexit talks. They warned that the “point of no return” — where they will have to deploy their worst-case contingency plans in order to be ready for the March 2019 Brexit deadline — was fast approaching unless there was clarity over what a transitional deal might look like.

But there has been some easing of those fears of late. By Wednesday, JPMorgan — one of the banks that attended the meeting with Mr Ross last Friday — said it had gained “better clarity” on Brexit at a meeting between Jamie Dimon, its chief executive, and Theresa May, the UK prime minister.

Many global banks have their main European headquarters in London, from which they sell products and services to clients across the EU. However, the loss of the ability to “passport” across Europe as a result of Brexit means that many banks plan to establish new subsidiaries or beef up their existing structures in the 27 other EU countries.

Regulators in both the UK and the rest of Europe have warned banks that they will be watchful of any attempts at regulatory arbitrage. The Bank of England is telling foreign banks this year that they should draw up contingency plans to subsidiarise their UK operations, which would require far more capital.

“A lot depends on what the ECB will require of entities they supervise,” said one banker involved in the US banking plans. “While traders can sit in London — at least for an interim period — and possibly forever, it is quite brave to assume that coverage bankers and salespeople can continue to operate on a passporting basis out of London.”

Regulators have told banks these subsidiaries must be sufficiently capitalised and staffed with enough senior employees in functions such as governance, finance and risk to be able to stand alone and to complete the ECB’s regular stress tests.

The European Banking Authority warned last month that London cannot retain access to the single market after Brexit by using “shell companies” based in the bloc.

But banks still lack clarity on exactly what functions can remain in London as opposed to the EU — and the number of people that this will affect. “We are all driving in the dark,” said another banker.

Some banks are studying “back-to-back trades”, in which products are sold in the EU before the risk is transferred to the UK via an internal trade, as a technique to keep more capital and staff in London.

The EBA said that back-to-backs would be tolerated, but with the caveat that enough capital and senior staff would have to be located in the EU to mitigate against risks. The UK and regulators have said back-to-backs are likely only to be a temporary solution.

Bob Penn, a lawyer at Cleary Gottlieb Steen & Hamilton, said: “Perhaps the most significant ongoing cost of Brexit for UK and international banks arises from the fragmentation of their balance sheets across the UK and Europe.

“For those that can manage it, re-domiciling, or a cross-border merger [resulting in a single European bank with a UK branch] represents the least-cost solution.- Copyright The Financial Times Limited 2017.