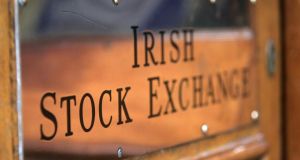 The Dublin-based firm received almost €14 million after costs for stake of more than 8 per cent in the ISE as the exchange was taken over by pan-European bourse operator Euronext in a deal in March 2018. Photograph: Dara Mac Dónaill

The State’s smallest stockbroking firm Campbell O’Connor, which is in the process of winding up after 59 years in business, made a €9.45 million gain on the sale of its stake in the Irish Stock Exchange (ISE) early last year, according to the firm’s latest annual accounts.

The Dublin-based firm received almost €14 million after costs for stake of more than 8 per cent in the ISE as the exchange was taken over by pan-European bourse operator Euronext in a deal in March 2018 that was ultimately worth €167 million. Five Irish brokers owned the exchange prior to the takeover.

Campbell O’Connor & Company Unlimited said in its annual results for the year to the end of March 2018, recently filed with the Companies Registration Office, that the financial gain it made on the stake sale pushed its profits up to €9.39 million from €353,461 for the prior year.

Company director Brendan O’Connor told The Irish Times that the firm, which set up in 1960, is within weeks of completing the transfer of clients to other brokers or cashing in their investments as the business is being wound up.

The company told clients earlier this year that they had the option of an automatic transfer to rival broker Cantor Fitzgerald, moving their investments to a broker of their choice or liquidating their holdings.

The company, which had an average nine employees according to its latest annual accounts, said in the client letter in early April that the decision to close down “reflects the ever-increasing complexity of doing business in a changing regulatory landscape, which does not favour smaller firms”.

The ultimate company controlling Campbell O’Connor & Company, COC Street Holdings, which is co-owned by Mr O’Connor and fellow directors Denis O’Connor and Albert MacFarlane, was wound up voluntarily last December with a surplus of €14 million.

Campbell O’Connor was fined €280,000 by the Central Bank in May for compliance failures in its responsibility to combat money laundering and the financing of terrorism.

A Central Bank investigation had identified five breaches of the Criminal Justice (Money Laundering and Terrorist Financing) Act 2010 by the firm. The firm admitted the breaches.

The regulator determined that the appropriate fine was €400,000, which was reduced by 30 per cent to €280,000 in accordance with the settlement discount scheme.