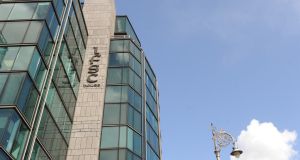 An Irish Central Bank report has said rapid growth in Dublin’s International Financial Services Centre (IFSC) arising from Brexit fallout gives rise to risks for regulators to grapple with, even though London will likely remain Europe’s leading centre for finance.

London is the leading global financial centre next to New York, standing out among European hubs in terms of size and range of services offered, the report noted.

The City of London has a prominent role in foreign exchange and over-the-counter derivatives deals globally, while assets in banks located in the UK top €10.7 trillion, versus €7.5 trillion for France or Germany and €543 million in Ireland, it said.

“How Brexit will eventually affect the City of London remains uncertain, even if several firms have already relocated from London to other EU countries in the aftermath of the vote,” the report said, referring to the decision by UK voters in June 2016 to quit the EU. But even if the City remains robust after Brexit, the impact of relocations on smaller centres such as Dublin, Amsterdam or Luxembourg could be quite material, it said.

The report said that the “rapidly growing and changing nature” of Dublin’s financial centre, together with fragmentation of finance in Europe, raises questions about financial stability risks.

It suggests that Brexit raises questions about how Irish regulators will work with UK peers to balance efficiency and financial stability in future, as a large part of international financial activity in Dublin could continue to ultimately be provided though UK firms.

“Second, the fragmentation of finance inside the EU across different sectors can on the one hand imply new risks in terms of greater financial complexity in firms, but on the other hand it may also be mitigating concentration risk,” the report said.

“Third, the growth of the IFSC – similar to non-financial multinational firms – may be changing Ireland’s risk profile,” it added.

The report said that the Central Bank has moved to address some of the issues through a “thorough authorisations process and by focusing resources on identifying and mitigating risks”.

“The evolution of financial centres at home and abroad still has the potential to affect risks to financial stability in the future and continued work on these structural developments will be important,” it said.

The report, published on Tuesday, is part of a series of papers written by Central Bank staff on risks and vulnerabilities facing the European financial system.